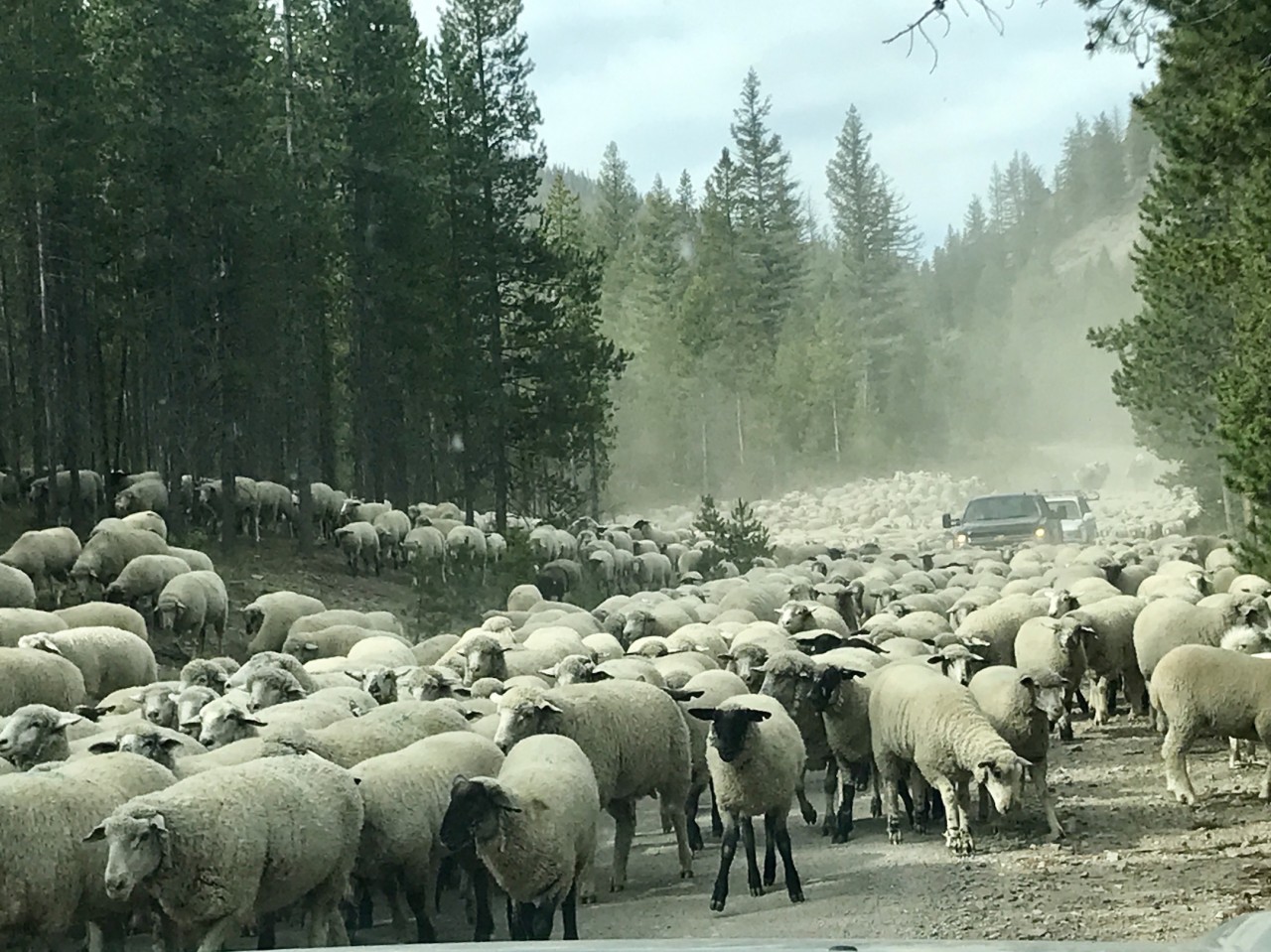 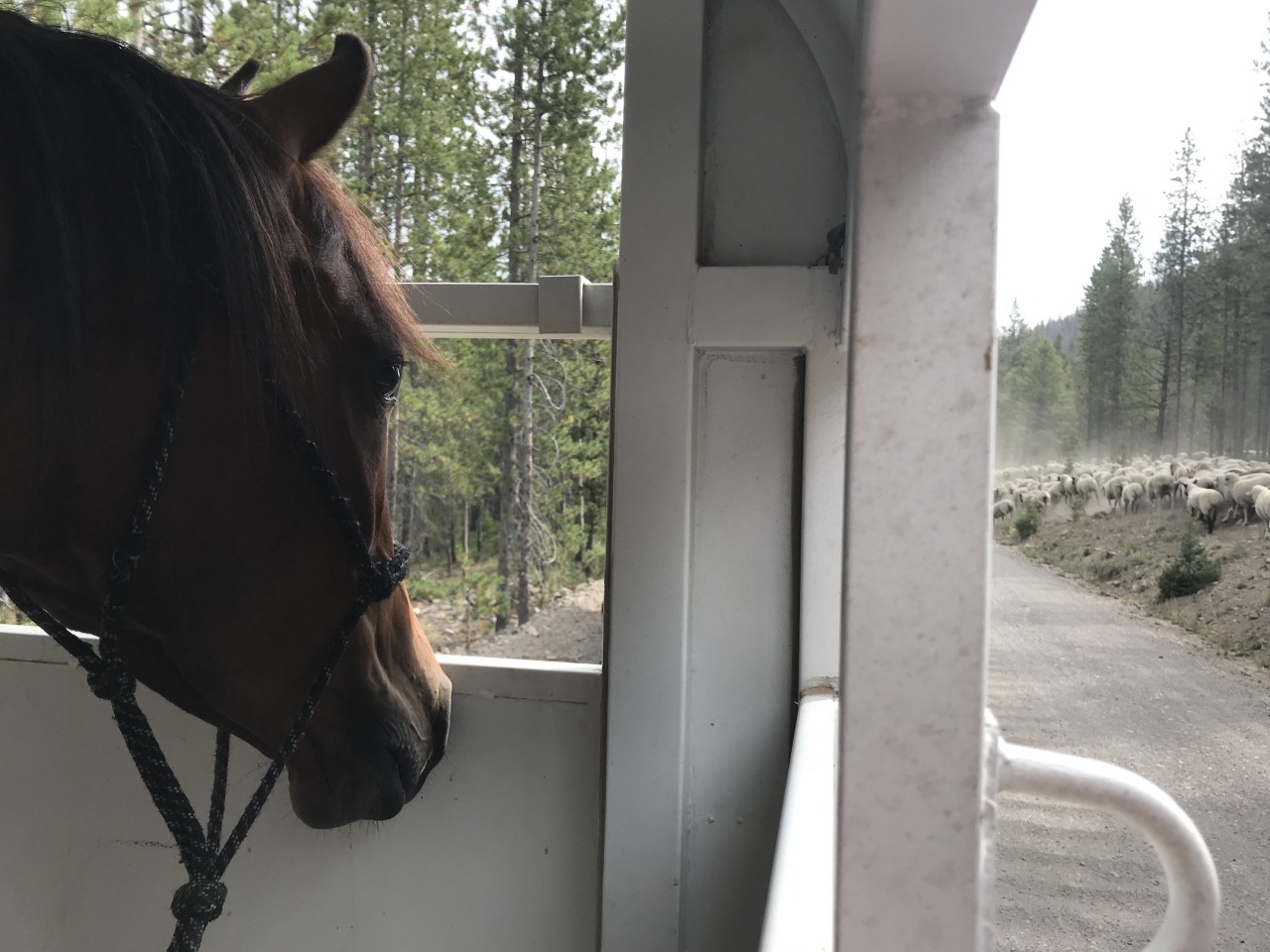 Here in Idaho, there are shepherds. They are mostly Peruvian men, non English speaking, that live the entire summer out in the mountains and valleys with enormous bands of sheep, a few great pyrenees dogs and a couple of horses, roaming from place to place grazing the grasses from springtime to fall. For decades, these men have carved their names and the dates on the aspen trees and as we ride by, we see things like "Gonzalo 1972" in a raised scar in the pale bark.

We loaded Smartie and Arizona Mac V into Carol's trailer, with the divider breaking the space into two, and drove north up highway 75 towards the trailhead. We'd been in Idaho for two weeks now, and Arizona had been out to a few of the trails and felt much more substantial now under me, than last year. He's shown me that he is a thinker and oh, so smart. Keeping in mind that he is only four, and hasn't built up much of his mountain climbing rump muscles, we'd kept to the low lands mostly. Today was going to be a long pull.

This was Saturday. Our goal was to avoid the weekend crowds of hikers, mountain bikers, and dog walkers, so we picked a trail that is on the map, but not much on most people's radar. Driving up the dirt road, we encountered an immense band of sheep. The sheep bunch together tightly and follow the two Pyrenees dogs, that lead the way. In the back there were two men, on foot, and two horses in the back, saddled, following the sheep. The band spilled off both sides of the road, into the forest. In the forest was another couple of guys, and pack horses, loaded up with all their necessities. We stopped the truck to let them pass.

Picture this, you are a horse. You are a prey animal. Your first instinct when you encounter another animal, is to flee, especially if you've never seen this animal before. Now picture seeing 800 of these animals, all bunched together, flowing toward you, engulfing you, making strange little bleating noises, and their little feet pitter pattering down the road and all around you. Where you can't see what's happening, there are men yelling to keep them moving.

The trailer started to lurch behind us. Smartie had seen plenty of sheep as they passed by his pasture and had gotten pretty used to them, but Arizona was not okay with this scenario. I got out of the truck, and not making eye contact with the Pyrenees dogs (their job is to protect the sheep and you certainly don't want them to think you have any interest in those sheep) and walked back to the trailer. Arizona was tied to the ring in the trailer, and his feet were very busy. His head was up, he was fighting the lead rope and shifting back and forth. I patted his rump and talked to him, but that didn't make a bit of difference. I walked around to the other side, and carefully untied his lead so he could have the whole half of the trailer to move around in, looping the lead rope around the saddle horn. Instantly, his anxiety dropped by about half. He still was quite concerned, his nose sticking out of the trailer, his eyes wide, but he could move, which made life much better. Just being able to turn and look this way, that way, turn all the way around was much better than being confined, tied in there. It took about ten minutes for the band to pass, and he watched with his nose out the back of the trailer as the last of the sheep trotted away behind us down the road.

When we got to the trailhead, I took him out and he was looking everywhere for those wooly monsters, their footprints still in the dirt at our feet, their scent hung in the air. Quietly, I asked him to back, to move one foot, then another, to move and to pay attention to me. In no time, his back relaxed, his focus came to me. I slipped on his hackamore (and my jacket) and we headed up the trail.

As we climbed, the trail meandered through meadows and forests, high rocky ridges framed the view on either side. We could see where the band had spent the night. Now and then as we approached a big white boulder, Arizona hesitated, "is that a sheep up there?" Then he'd realize it was just a rock and walked on by. Whenever we came to something that caused him very much insecurity, Smarty would go ahead and show him the way, calmly. Near the top of the trail, wildflowers blanketed the meadows on either side of us, purple, yellow, blue, red flowers smiling up toward the sun. A red tailed hawk screeched and flew out from a pine tree, swooping down the valley.

At the top, we came out into a huge bowl, large rock cairns marking the direction of the trail. We rested there, at the top of the mountain, I shared my apple with Arizona, and he nibbled at the high grasses.

I led him down the first part of the trail, where it's steep. It's more comfortable for his little body to walk down steep without me on his back, and I haven't gotten to hike as much as I'd like anyway. When he thought it was time to play with me and my hat, I stopped, abruptly. He stopped behind me. We backed up two steps. I stopped once more, sharply, and he decided maybe nibbling on my hat wasn't such a great idea after all. I got on after a mile or so, and as we walked down the hill, I relished the joy of our "together of mindedness" that was going on. He is so bright minded, so enthusiastic of this world we live in. It's a real pleasure just being with him. 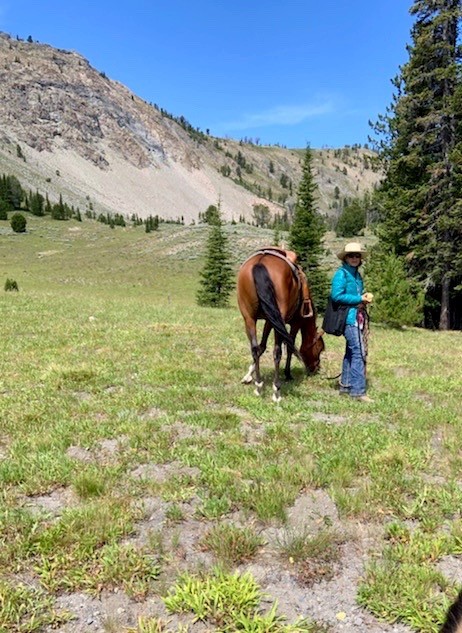