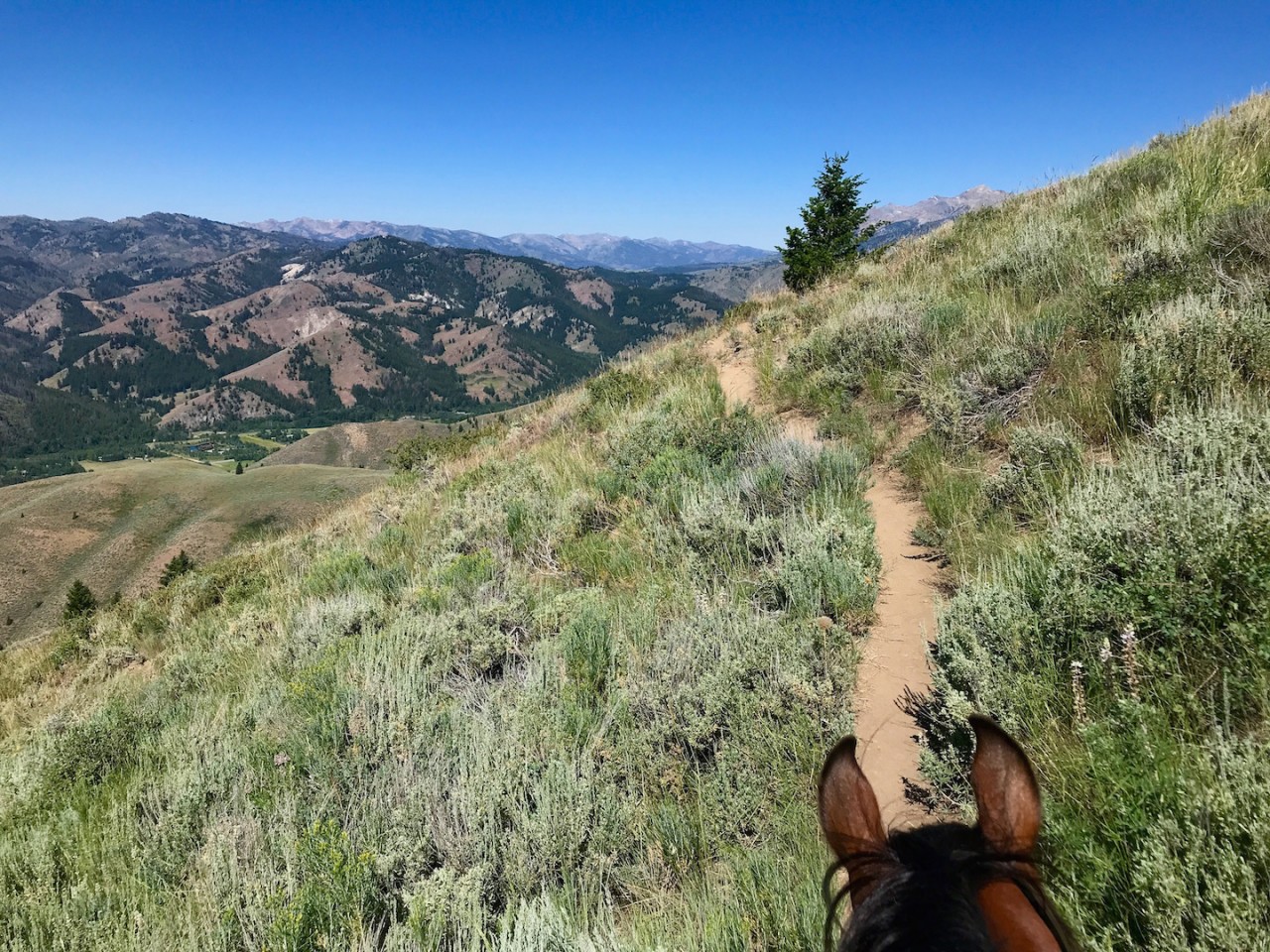 We had no idea that this trail had become so popular. I picked up Carol and Smartie on Saturday morning and we drove down the road to the Taylor Loop trailhead. This trail is only about four miles long, but it's a pretty steep trail. We chose the easiest direction, with the steepest part on our climb instead of our descent. As we were getting ready at the trailer, one car after another drove by us. "Oh my, it's a busy day today!" Carol said.

Right at the start, Arizona was crowding Smartie from behind, so we passed him at a wide spot and bravely led the way. The trail starts out in the woods but soon climbs up into a sunny slope, covered with sage and flowers. There were hikers everywhere, dozens of them. I remember the first time I rode this trail, I marveled at what a good work out it was with the long steep climb and how nobody knew about it. I don't think it was even on the map yet. Now, on a Saturday, it seemed everyone's favorite trail. Arizona was happy to be out front, and seemed pretty strong on the climb up. We did stop a couple of times to let them catch their breath. At the top of the ridge, the trail levels out somewhat and heads north in a meandering way. As we approached a solitary pine tree, on a hillside of solid blue sage, a fat blue grouse bird exploded out of the bush, followed by a younger blue grouse. Arizona planted all four feet, like he'd nailed them to the ground, and in a second or two another young bird flushed out in front of us. The fat birds, fiercely flapping their short wings, swooped out and over to the tree. Arizona just watched, then we calmly walked on.

"WOW!" Carol's voice came from behind me. "What a good baby! That was fabulous!"

I was pretty proud of him, I admit. I stroked his neck and on we went. Most of the hikers had hiking sticks that some horses will see as a threat, but they didn't bother Arizona. I kept my eye on the dogs, another thing that most hikers have with them. I have seen a dog come aggressively at a horse, and that's no fun, with a young horse especially. Everyone stopped and stepped off the trail, holding their dogs. We'd chat with each group, stating what a lovely day it was and how nice their dogs were. "Nice horses!" we heard from just about everyone. One couple stepped off their trail, their dog on a leash, but where they stood was inches from the trail. Arizona dropped his head as if to just say hello to the little dog and walked on by. There had to be forty or fifty hikers today on this trail, I'd never seen so many people on a trail in my life! One amusing pair were a couple of young men we ran into at the top. They stepped off the trail. "Hello!" I said "Thank you for stepping off, this is a young horse, it helps him to know that you are a human being if you say something." (I try to offer this information if it seems appropriate). "Hello." They both said in unison. "Oh my God, is that beer you're drinking?" I said. They both gave me the thumbs up. "Right on!" Bill and Ted's excellent adventure.

On the downhill section, Arizona was not so eager to be in front. He stopped now and then, so we put Smartie in front and followed him down, zig zagging through the forest, passing more hikers and dogs. Most of the time he did pretty well but on the steeper sections he sort of fell apart a little bit, slipping or tossing his head. At the end of the loop, back at the trail head, was the one creek crossing. They both took a long sip of water before we stepped over it and walked back to the trailer.

Well, he's passed his hiker/biker/dogs on the trail course. He is still just the happiest little guy out there. Boy I wish summer lasted forever. 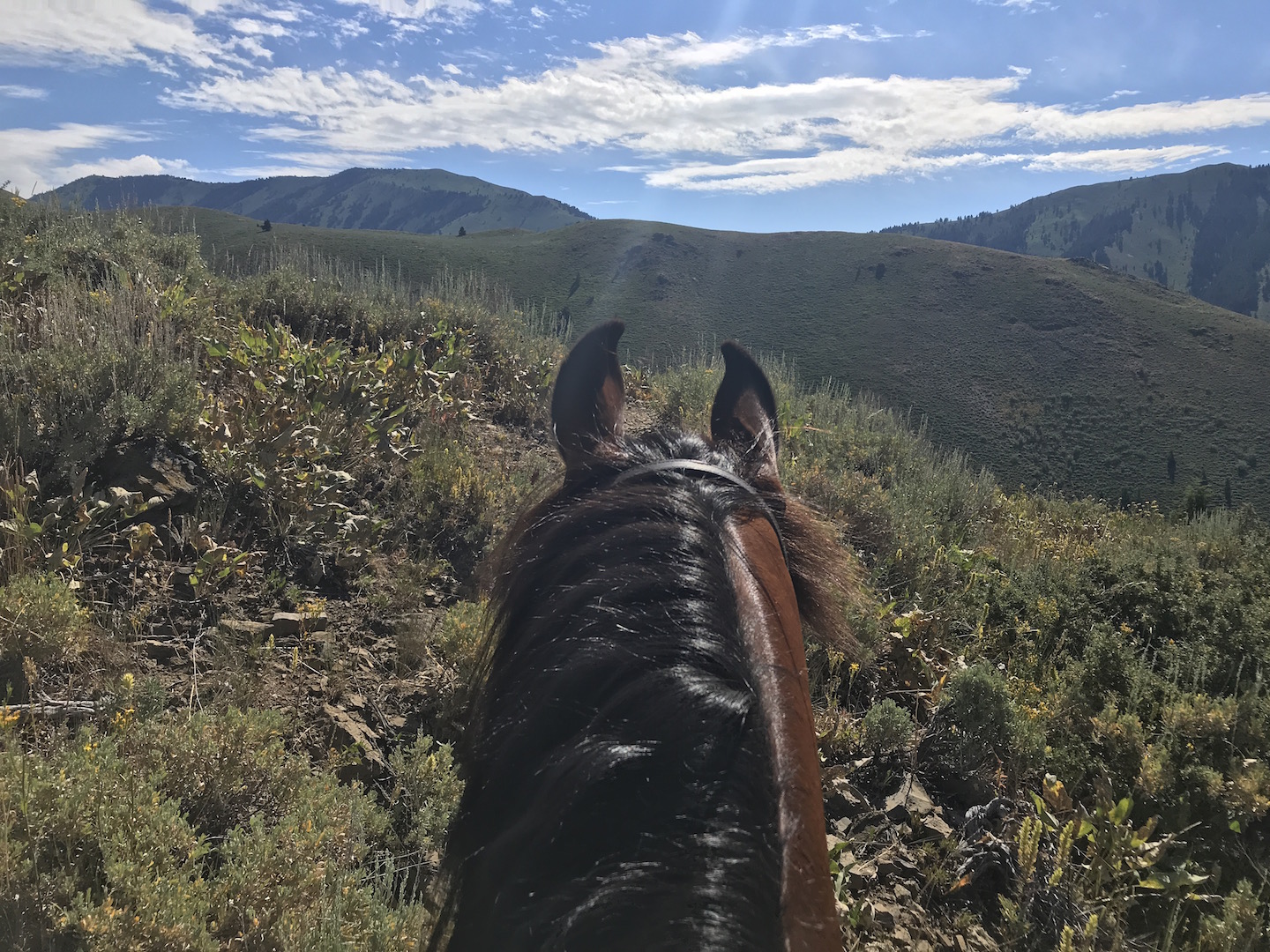