Sheila wrote to me after that ride to Grand Jean.

"Great story Lisa!!! Can't call you a scardy cat! I love your reports and pictures... I agree, that would have been too big a step for Commotion. Thanks Sheila"

I loved the idea that I was getting her out of her big brown chair, even if only in her imagination.

9:00 AM. Still a bit chilly out, and Commotion had been off for a week and a half. After saddling him I put him on the lunge line and offered him to move about. He was very happy to oblige, tail and head up, a few joyful leaps. We changed direction a few times and he began to focus on me. Up I went onto the saddle and off we went. Carol and Renee and I rode out of the pasture gate into the million miles of open space beyond. At the start he was a little enthusiastic, but not bad at all, just happy to be doing something. We followed the tracks from where the shepherd's water truck had gone, and through a valley where a massive flock of sheep had been grazing until just the day before. It was still quite smelly. The  valley turned into a gully and we followed it until it turned into a game trail and then it just disappeared altogether. Commotion volunteered to go first and I agreed. We were totally off trail and the ground was rocky and steep. Then it got steeper. I grabbed a hank of mane to take some pressure off the saddle as we climbed higher. The day was warm and we needed to stop a number of times for the horses to catch their breath, especially Smoke, the twenty three year old horse Renee was riding. We were in an area where the deer and the elk and the coyotes live. Commotion bravely strode out ahead like he owned the mountain. Up and up we went. This was a real work out for that tiny little behind of his and he did great.

The day was perfect, we'd shed our jackets, then the sun would go behind a cloud and a breeze would blow and we'd zip back up again.

With a last big effort, we scrambled to the top, meeting up with the Taylor Canyon trail, which would loop around and take us the easiest route back down.

We took a right turn and followed the high ridge before the long downhill to the valley. Commotion remained very happy in the lead; he was not jiggy or nervous at all. Occasionally he looked at a rock or thick brush (where the wild things can hide) but always kept his composure. He seemed to be having a very fine time.

Ahead of us In the distance, around one long curve in the trail, we saw a couple of hikers with their dogs coming toward us. Commotion stopped to take a look at them, and moved on. As we got closer, he kept an eye on them. They were chattering away like a couple of chickens at breakfast time. Commotion was totally focused on them and their dogs when a huge sage grouse flew up just ahead of us and to our left about a foot away, flapping wildly, trying to keep his fat little body airborne. This was his biggest spook so far. It was an honest to goodness spook, but really, not that bad. He wound up just off the trail, facing the other direction, but he did not flee or do anything bad. Then we went on like it was no big deal.

What a nice boy.

Down, down, down we went. As we neared the final down slope, Commotion was starting to stumble now and then. I believe his legs were tired. I rarely think a horse gets truly tired, but let me tell you, this was a work out. He was eager to get home (to Roy). He was still not jiggy, just stepping out. I thought I would just keep him motoring right over that little hidden dip creek, which is a stickler for most every horse, so, focusing on the far side, seat relaxed, I kept him going. We strode right up to it and he STOPPED. Snort. When Badger got up beside us, he stepped over it like a big boy.

For the rest of the ride, we stayed behind of the other two. Back at the barn he got a good scrubby soapy bath and I let him back out into the giant pasture with Roy. He galloped around for a minute to let me know that he was not that tired.

He gets an A for today.

He is a mighty fine boy. 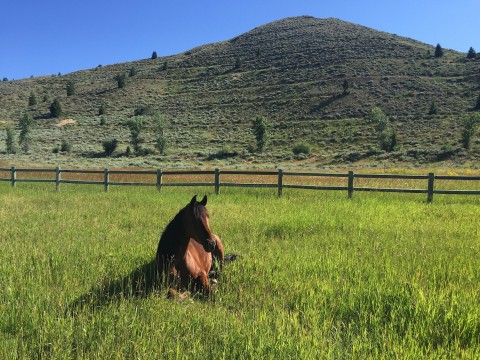