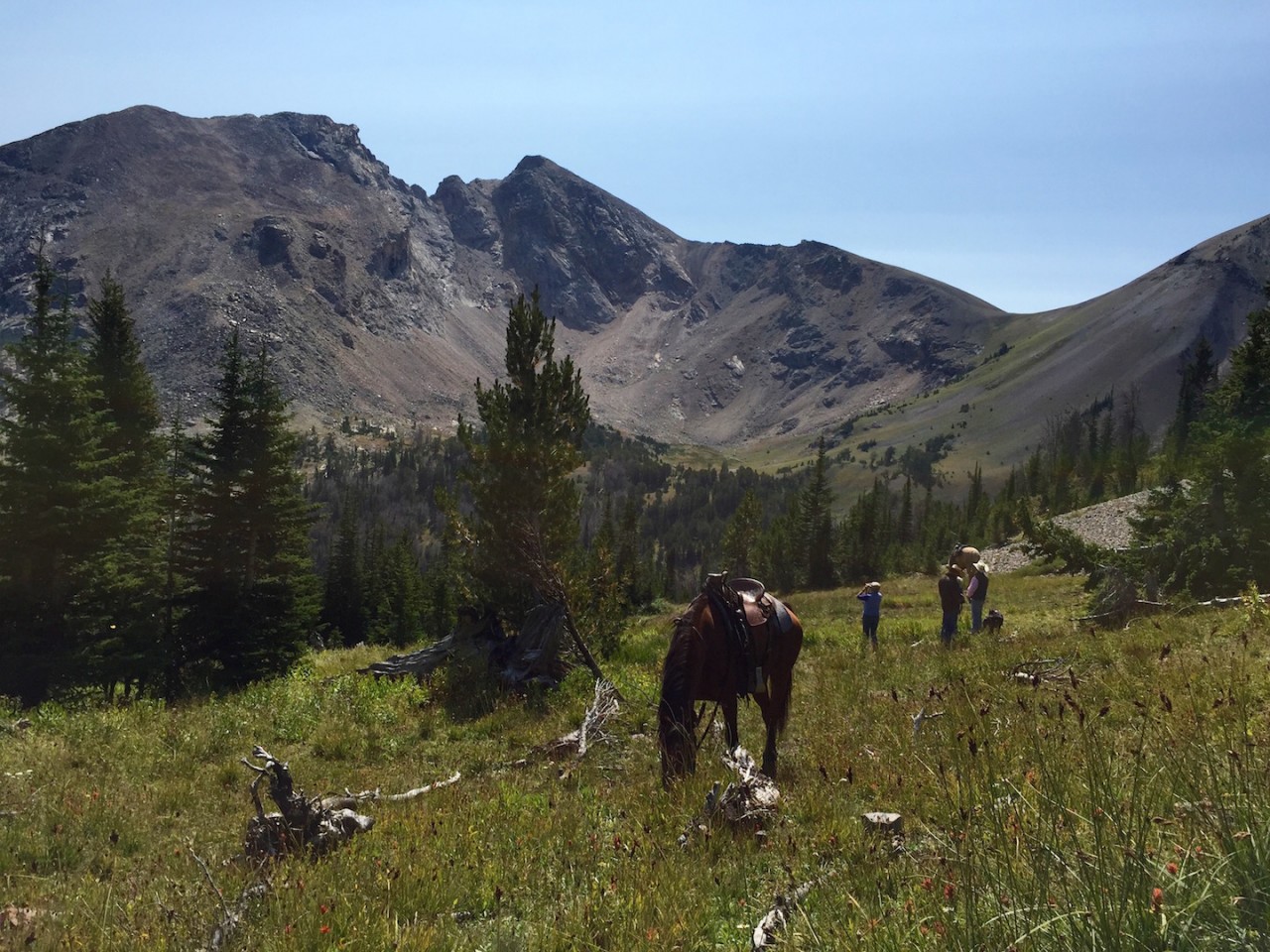 Carol wanted to drive her big fancy new truck today, which delighted us because our old Ford has about a billion miles on it and the drive up Trail Creek Road to Summit Creek is a hard pull up a steep crazy road. Should have named that road Vertigo Road.

The trail starts right out with a simple creek crossing and then climbs a steep hillside. Soon we were on a skinny trail, the creek far below us. LB and Dave had brought their young bird hunting dog, a two year old pointer named "Covey" with LOTS of energy. I kept my eye on the bouncing dog that bounded from one side of the trail to the other, sighting her way in front of the horses, then behind. She was crazy! I was hoping to make sure that she never scooted under us, like dogs will sometimes do. Commotion didn't seem to mind her much. The trail went up and up, the morning light filtering through the pines and the smell of sage permeating the air. Commotion was relaxed and followed happily along at the back of our little group of five. These trails change every year after the snow melts and I hadn't been on this trail for seven or eight years, so it held a feeling of adventure. We came to a creek crossing that looked pretty nasty. Tangled roots and wet mud led down into the creek, with a steep climb out the other side. Mac went in carefully, and stumbled on a root, kicking up a piece of wood as he scrambled out the other side that flew off to my right. I asked Commotion to go in and he did, but the ground was very strange, sort of like a floating mass of hard mud with roots over the underwater flow. As he went in, what looked like solid ground collapsed. He lost his footing. Scared, he tried to turn around to go back out but somehow he sort of raised up and fell down at the same time. He never tipped over and I managed to stay balanced right in the middle of the saddle as he launched back out of the creek on the same side as we'd gone in. He looked at Smoke, wide eyed, telling him no doubt, to NOT go that way!

"There has to be a better place." I said to Dave.

Sure enough, there was a better spot just upstream. We had to step over a handful of fallen aspens to get to it, but it was easy peasy. Then we went on.

In places, the woods were so tight with young trees, our boots brushed on both sides. He remained calm and happy, following Roy everywhere and anywhere.

I thought to myself "Thank God that bad spot is behind us".. then my old brain called up an earlier memory from the last time I'd ridden this trail. I was fairly certain we hadn't come to that spot yet, and it was much worse.

And then, sure enough, it was there before us. A tight little steep and muddy crack where the creek flowed, with exposed roots to get tangled up in. The trails maintenance crew had built a little bridge of skinny logs that hikers could walk over, but it was not at all sufficient for a horse. Roy went first, carefully picking the best way to go. He did get to the other side, but it was so bad that David went up to the right to look for a better place while we waited. Roy fell down to his knees and could not get up till David got off. Looking back at us, David shook his head, eyebrows raised. It didn't look good. Dave B got off Smoke (it's so confusing when there's more than one Dave) and led him across just below the bridge. Smoke is the 23 year old and has more miles than any of us can count in the mountains. He carefully, very slowly, picked his way through. Carol got off and led Badger the same way, but Badger got nervous and leapt one spot, knocking Carol down into the mud. She said a very bad word right then, but was not hurt. I went the same way, leading Commotion. He cautiously placed each foot, slowly, thoughtfully, and stayed away from me as we crossed. What a good boy. LB went bushwhacking down the hill looking for another spot. Soon she came crashing through the bushes back up to us on the other side and on we went.

We reached the top about two hours later. The horses munched on that sweet mountain grass while we had our lunches admiring the raw beauty of the Pioneer Mountains.

This is an out and back trail, not a loop. This means we had to maneuver those bad places again, but I wasn't that worried. Commotion and I got in the lead to start out. There were places where avalanches had roared down from side canyons in the winter, depositing all sorts of enormous broken trees and stumps like little pick up sticks.

By this time, after all the really challenging and various water crossings that we'd been across this summer, we went through every thing we came to confidently, with hardly any hesitation. When we got to the nasty place, Dave B crossed first, the same way, by getting off and leading him. I didn't like that place. LB and David and I went off trail down the hill to cross the creek further down. We crossed once (easy) and then had to cross twice more to get back to the trail. The entry was a little flimsy, but following Roy, Commotion went right in. Getting out however, was a not very easy and it was another launch. He can really get some air sometimes. I laughed out loud and up we scrambled to the trail, me petting him and telling him what a good boy he was.

As we neared the end of the trail, Dave B was behind me.

"How long have you been riding this horse?"

I told him about how when I picked him up that he'd never been in a trailer before and how nervous he was that first day I got on him, but that since we'd been in Sun Valley, for about two months, that he's been a real gem. I said that he liked it out here in the mountains. Dave agreed and said he was mighty impressed, that today had been some truly serious riding and that he could hardly believe Commotion was so young with so little experience. "I'd say that horse was worth about $100,000. After today!"

Made my day, let me tell you. I gave Commotion a good little stroke on his neck and his rump. "I agree."

What a perfect anniversary day. Can't think of anything I'd rather be doing. 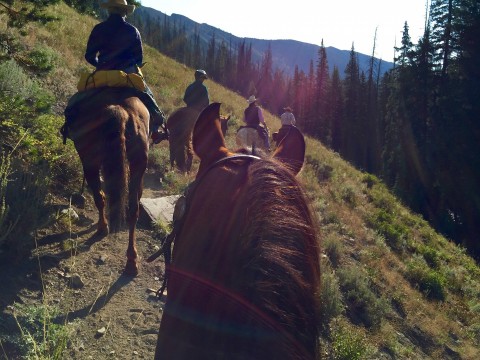 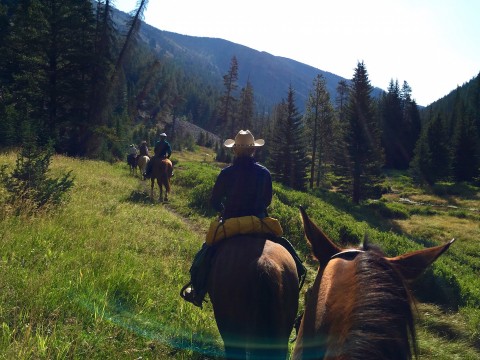 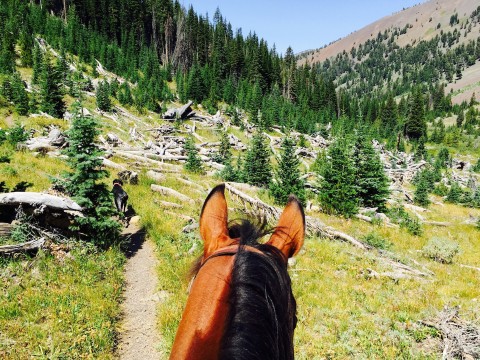