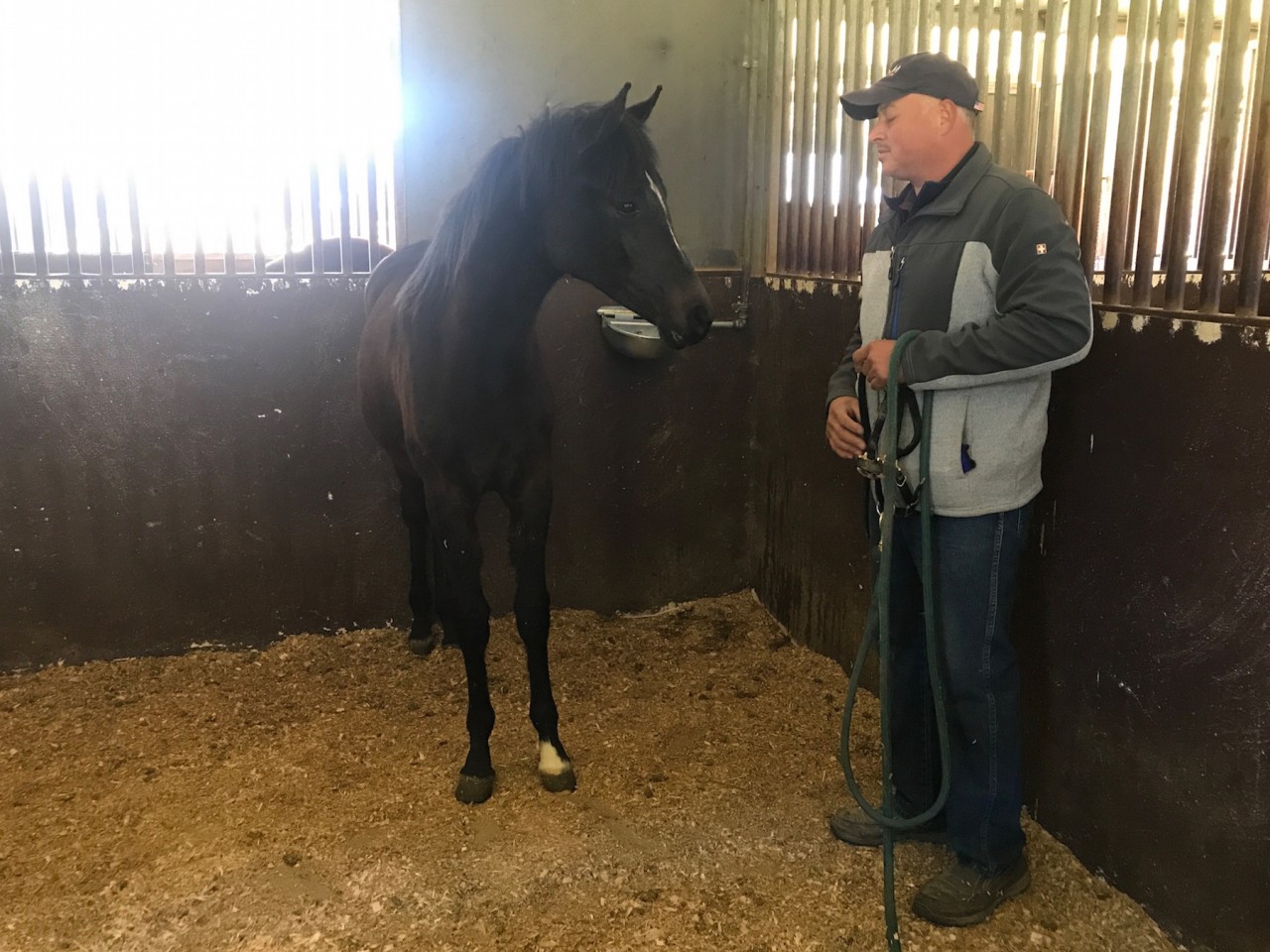 December 27th, two days after Christmas. The morning was perfectly glorious. No wind, no clouds, the sun warmed my back through my jacket. I found Mike at the wash rack hosing the soapy suds off a big bay horse. "Good morning Lisa!" his blue eyes smiling at me. I'd asked him the day before if I could shadow him and watch while he worked with the young horses. It has always impressed me how well behaved every Varian horse behaves. It's like they've all been to finishing school, they're all so polite and poised. He waved his arm at me to follow as he walked the horse back to his stall.

After picking up the little black halter from the hook, he slid open the door. "This is a Major Mac baby." He said. The yearling bay filly floated around inside the stall, head high, tail straight up in the air. He stood still and let her watch him and think it over, figure out that he was not going to hurt her. He'd only worked with this filly for three days, and only inside the stall. Peering through the door, I watched as he quietly, gently used his body to encourage the filly to move around as he directed. He spent a lot of time without putting the halter on. She circled him, left and right, little by little trotting around more relaxed and comfortable. He asked her to stop, and when she did, he cooed to her, petting her neck and head, wrapping his arms around her, then he'd let go and step back, and wait for her to think about it. He gently brought her head left and right, and gently pushed on the front of her neck to make her back one step. Once she got curious about him, connected with him, he worked at having her follow him around the stall. Not until she was good at this did he put the halter on, very slowly, very gently. He waited until she said it was okay. There was no head shaking, no dancing around in the stall, it was just a quiet agreement between them. He had no need to pull on the lead rope, she followed his direction like a little lady. He asked her to back up a step, holding loosly to the lead rope, and turning her head just a little bit to unlock one back foot. The instant she stepped back, he dropped the rope and petted her. He slid open the door, and walked her outside into the alley. Delicate little steps carried her hesitantly under the arbor, across the driveway, to the round pen, her big dark eyes scanning everything around her. She'd been out here before, but always with her mother. She kept close to Mike, she was already figuring out this was the safe place to be.

In the round pen, with the halter still on, and with a stick to encourage her forward, he asked her to walk, trot, and lope. He never touched her with the stick, it was just an extension of his arm. He asked her to back up, turn around, speed up, slow down. When he put her away, I thought that was it, we were done.

Hanging up the halter, he pointed down the row of stalls. "Now we have another filly, she's the same age, but will be shown in halter class." He'd worked with her a week or so longer than the Major Mac filly. She was an elegant chestnut, taller and more animated than the bay. He brought her to the round pen after a shorter amount of time in the stall with her, and again, I peeked through the big open door while he worked with her. His whole demeanor was different with this filly, because she was a little further along, but also because she was going into the halter class in the show ring. He asked her to do the same things, but with higher energy. After a few minutes, he had her trotting along beside him on a long loose rein, exactly like they do in competition. Then he stopped, with a loose rein asked her to stand and pose, head set just right, legs positioned perfectly. It was like watching a magician. "Sheila always told me that we can't train them in the show ring, they have to do it all perfectly here, first. If we try to train them in the show ring, it's ugly!" When he was finished, I walked with him and the filly back to her stall. "That was great Mike, thank you so much!" He smiled at me again. "We have one more!" He loves his job, and so loves these horses. He haltered a three year old that was almost ready to go under saddle. I followed him back to the bigger round pen at the back of the big arena, and climbed the stairs to the observation deck. The big grey gelding took my breath away, he was so perfect, standing there in perfect condition, perfect conformation, dark eyes bright, giving all his attention to Mike. His dappled coat shimmered. After a little bit of ground work, Mike picked up the surcingle and introduced the horse to it. He'd never had that on him before, so at first he flinched. Miked rubbed the horse's body with it, swung it under his belly, then softly, slowing buckled it around his cinch line. Mike asked him to move around to the left and right, then put a bridle on the horse, with a snaffle bit (another first) and drew the long draw reins through two loops on either side of the surcingle. He drove the horse left, right, changing gaits. The long reins drooped down now and then around the back of the horse's legs. After a while he had the horse standing perfectly still, facing away from Mike, looking at the wall of the round pen, with Mike right there behind him in his blind spot. This is very hard for a horse. It requires total trust.

Walking back to the stalls, I thanked him again. "This is what I love to do," he said. "I don't want to ride the horse, I do a better job with them on the ground." With my head down, watching my boots walk along I smiled, appreciating that he had thought about his presentation to me. Picking the youngest first, then one slightly further along, but much different, then up to one almost ready to go under saddle. He has that invisible, kind and grounded energy that the horses can immediately rely on. He puts the time in, working a little bit every other day consistently, building on each lesson. Nothing happens over night. No wonder all of his horses have such a regal carriage, such respect and trust. There is no fear in his training, just straight and clear communication between Mike and the horse. There is nothing for them to worry about.

What a fine way to wrap up 2018 and this year's quest for knowledge.

I can't wait to see what next year brings!

Happy New Year to all. 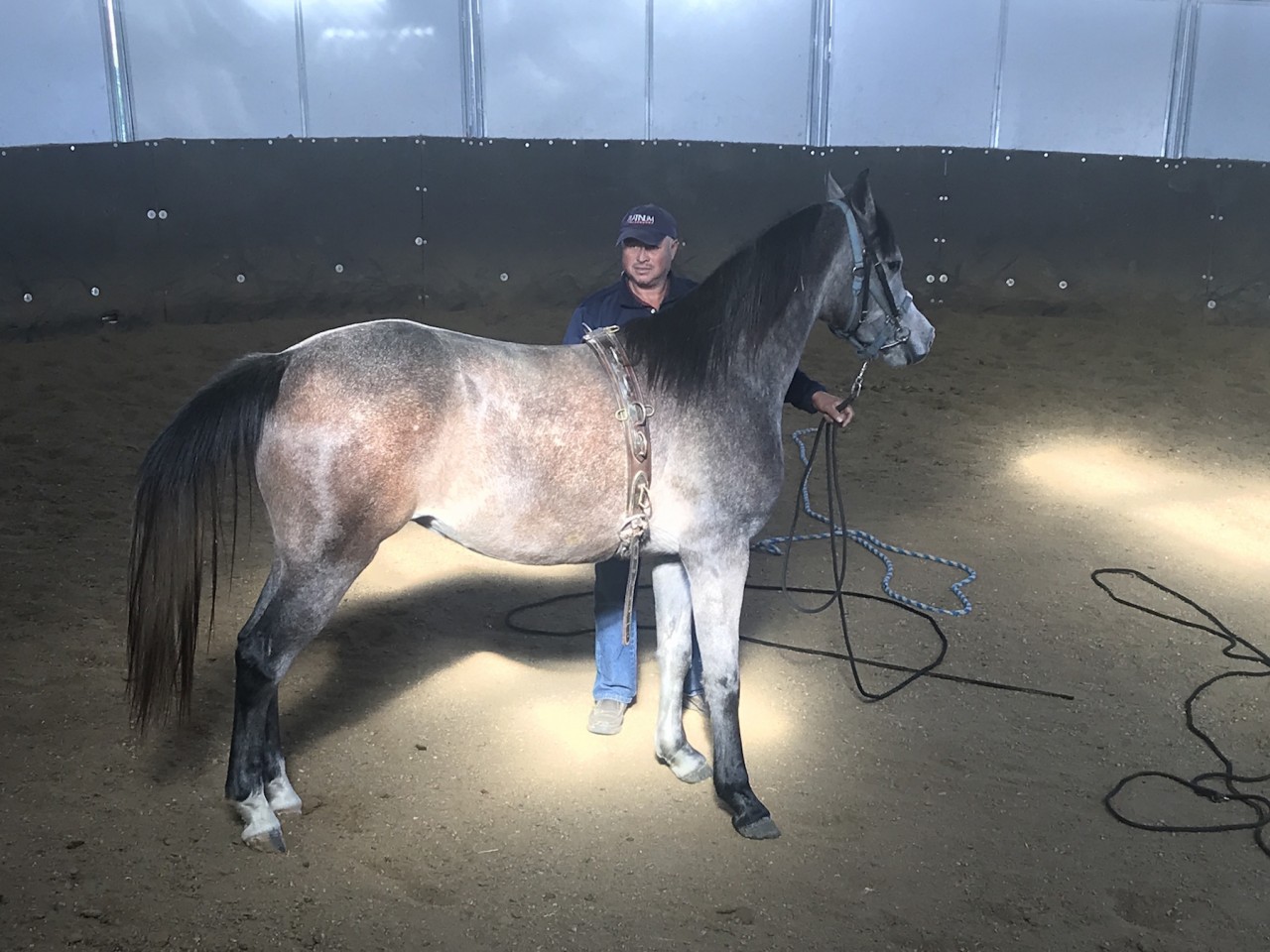