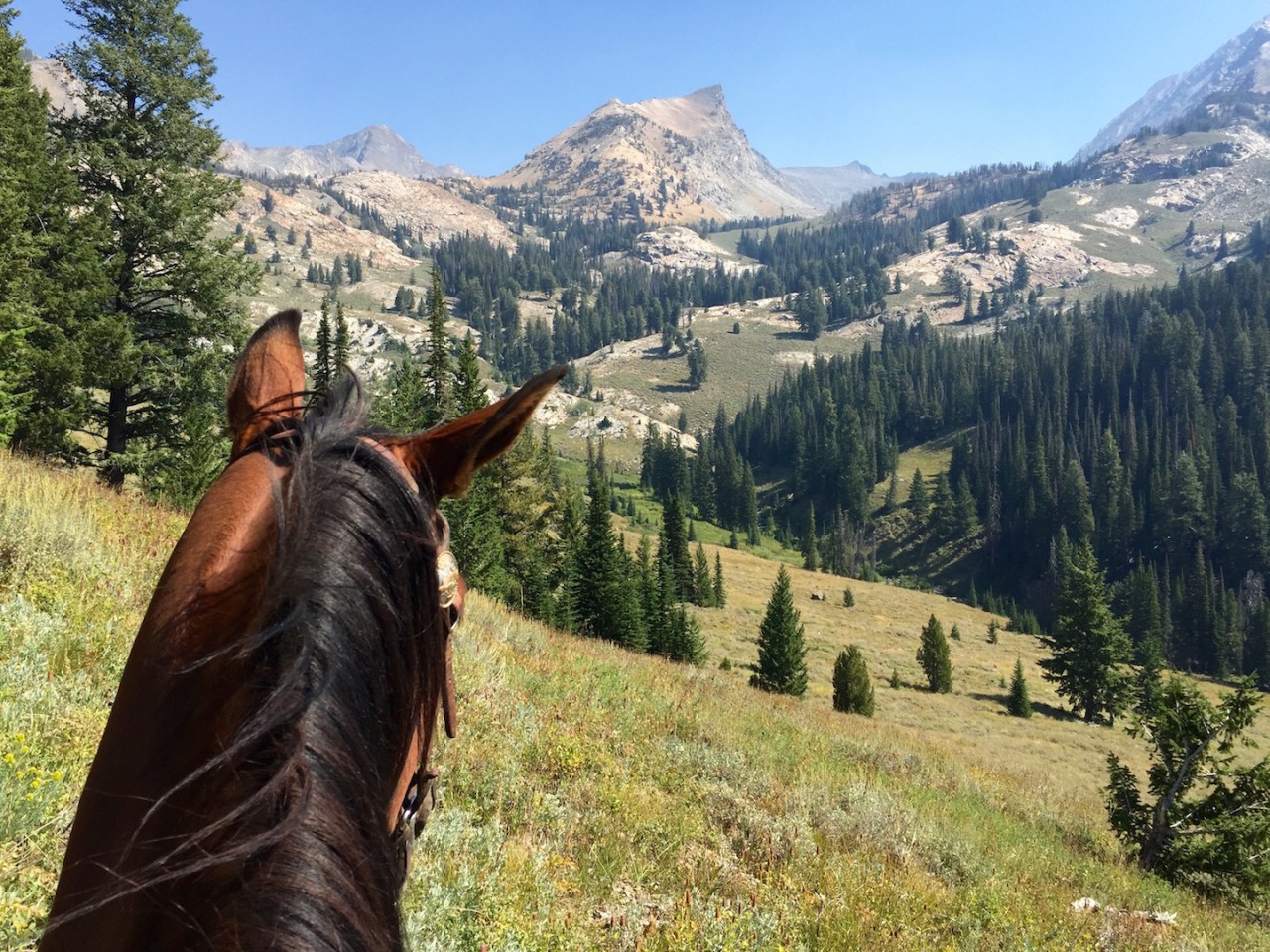 This would be our last ride of the summer together. Our route would be up the East Fork of the Hyndeman creek to Pioneer Cabin and down Johnstone Creek, a nice loop of about twelve miles. I called Martina on our way to pick up Carol and the horses, and with very short notice, she met us at East Fork road and we drove out across the corduroy roads to the trailhead. LB and Dave B came too. David and I had ridden this trail about nine years ago, and I remembered a few things about it. I remembered it was beautiful and steep, very steep.

We started out at the Hyndeman trailhead and the trail was lovely, following the creek. I was delighted to have Martina along and to see Cowgirl Lena V, who was just a mere wisp of a filly when we rode last, and was now a full figured mare of eight.

The trail followed the creek for quite a ways before it began to make the climb up to Pioneer Cabin. The scenery became more and more impressive, in spite of the smoke from the fires in Washington and Oregon that hazed up the sky. I did not recall that the trail was quite this sketchy but then again, these trails change every year with the snow, rain, and mudslides. We climbed and climbed. The trail switches back and forth for a few miles, rising 2,400 feet to the top. Not a good place to shortcut the trail, a misstep off the trail would be a long bad slide to the creek below. Commotion was his normal mindful self and took it all in stride. This was, no doubt, the longest and steepest hill he'd climbed, and it was a struggle for him, with his tiny hiney, but he just went along with the group, like it was just another day. No worries.

Finally, we reached the top. Pioneer Cabin is a tiny little wooden cabin built in the 30's as a cross country ski hut for overnighters. It is a basic little shack really, full of years of graffiti. The view from the cabin looks right out at Hyndeman and Cobb peaks. Breathtaking. It was a perfect day, not too hot, not too cold, no true wind, just good friends, old and new. The horses grazed until they lost interest, then we tied them in the shade of a circle of tall pines. We had our lunches and visited with some hikers that passed by (from New York City no less.. that were very enchanted with our horses) and after an hour or so, continued on our way over the hill to the intersection to Johnstone Creek.

We were, no doubt, on top of the world.

There were not many logs nor much water on this ride, but it was steep and narrow. Once again, we had Covey, the bird dog (is that the perfect name or what?) and she was darting to and fro and enjoying the day as only a dog can do. We rode down and around the hills to a place where the Pioneer Mountain view just about blows your hat off with its beauty. Down we went, following Roy, solid as ever, to a meadow about half way down. Suddenly a YIP and shout… woke us all up from our slumber of the views and of the day. YIP YIP YOWL. Darned Coyote, we were in her territory and she was sounding the alarm. Covey smartly tucked in right between Roy and Commotion, head down, not wanting to cause trouble. On we went, with the coyote following along the other side of the creek, yipping LOUDLY that we were most definitely in her territory. On we went, down down down, the trail was better on this side of the mountain, nothing too difficult. Just when we thought we'd passed the rocky path out of her concern, she BARKED again at us. That coyote sound is so devilish… she was tracking us, shadowing us down the trail. We could see her, focused intently on the dog.

At one point, she came closer and closer to Covey, who was hugging Roy's heels. When she came too close for comfort, Dave B blew his dog whistle to call her back to him and David made a little motion toward the coyote. It was a little intense at this point, as the coyote came quite close to Covey, and a couple of horses became quite concerned, and we were in a narrow part of the canyon. Commotion looked at Roy, who was not the least bit concerned, and wondered what that devil dog was barking about. Dave B got off his horse and walked Covey down the trail, collar in hand.
After a long while, she gave up on us and we were in the clear. Dave B got back on his horse and we came across a few stream crossings where the horses took a nice long drink. There are a few places on this trail that a horse really needs to pay attention to, and all did well. Add that noisy predator and it was quite a day.
Then we turned a corner, and there were our trailers. A fine finish to an Idaho summer. 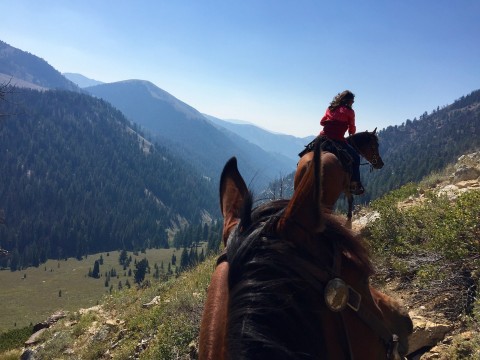 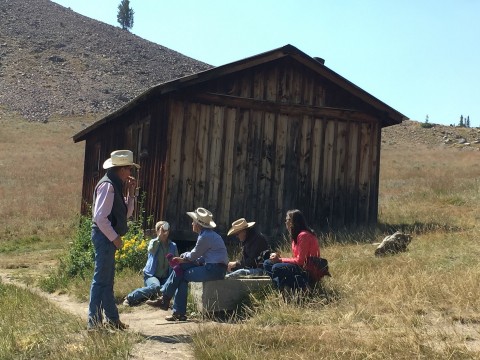 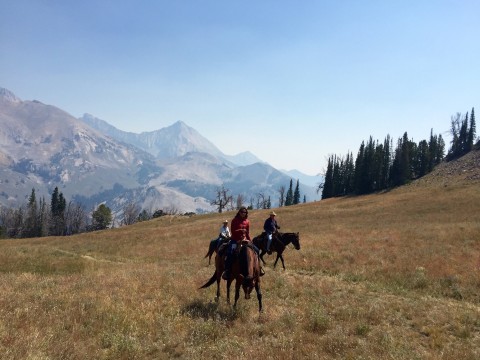