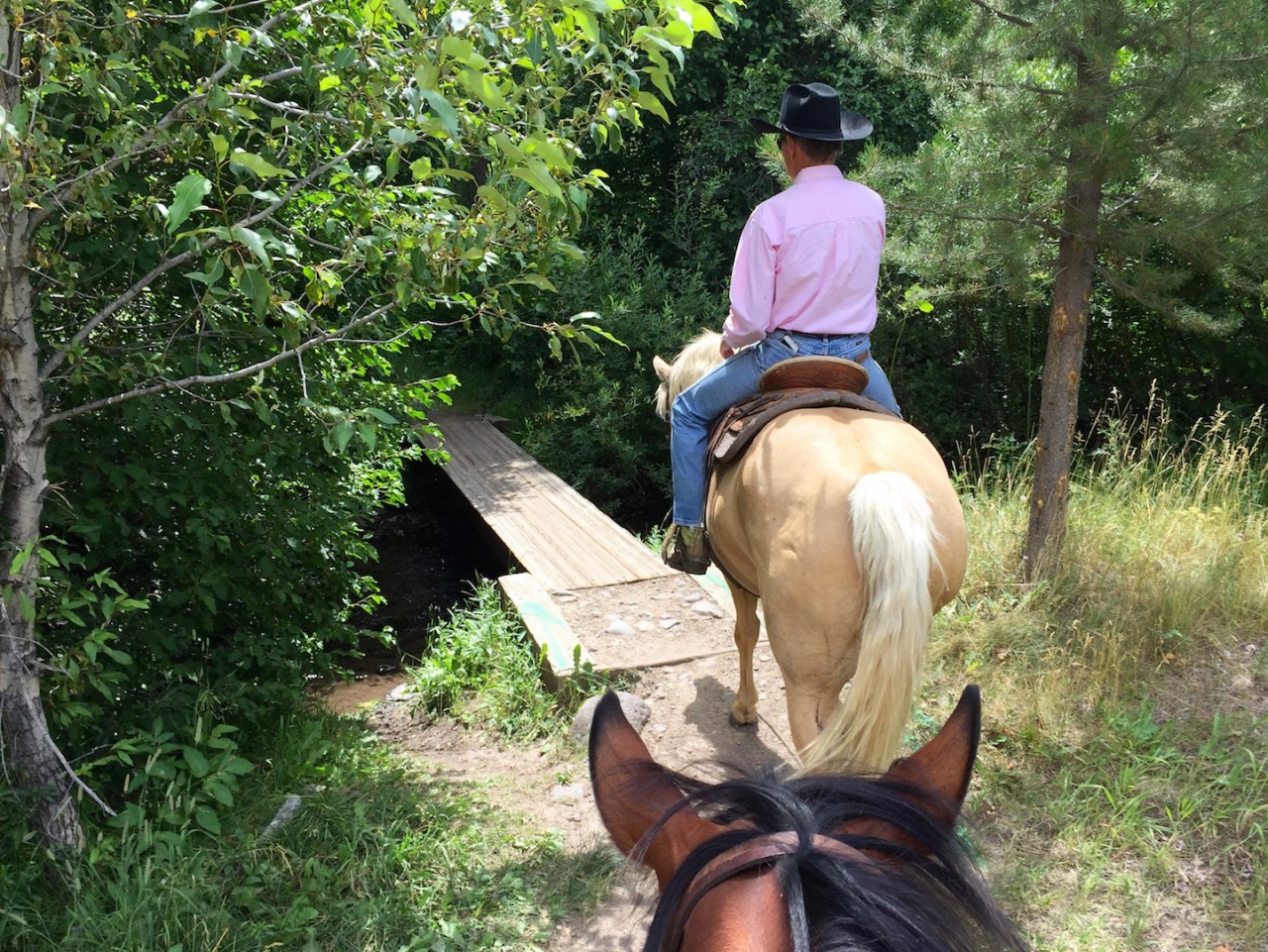 There's a funny little place north of Ketchum where an rustic old store sits on the side of the road. Behind it is a number of little cabins and trailers. The place whispers of early Ketchum and the 1960's. "North Fork Store" is what the sign reads, but the store is long closed and I'm always curious about the people that live back in those few tiny houses. Are they hippies? Old Ski bums? Behind the houses is where we'll start our ride today, at Oregon Gulch trailhead. Instead of a loop trail, or an out and back, we decided to start there, ride through Chocolate Gulch (I love that name), and end at Fox Creek, across the highway from the horses' home pasture. This can be a long day, and it was hot, so we left Lily at home, picked up Carol and drove north.

At the trailhead, the creek was completely dry, and we soon discovered why. The beavers had built dams and the creek ended in a number of large deep pools. Beavers are notoriously shy, and if one is ever to be spotted, it would be early or late in the day, but of course we searched the waters and dams, looking. Coming toward us, came a woman and her two dogs. Breathlessly, she reported that about a quarter of a mile further up, she'd run across some moose.

We see plenty of elk up here, but moose are more unusual. Also, moose can be deadly. They may not be as intimidating as a grizzly bear, but they kill just as many people, maybe more depending on where you get your research. They generally have a nasty attitude at life and will take it out on anybody that passes by. Especially if the people have dogs. Especially if it's a cow moose with a calf, which is what this was. Actually she had two, a baby and a yearling. Boy I was glad Lily had stayed home.

David was in front, I was in the middle and Carol was behind me.We thanked her, glad to have the warning, and rode on.

And then, there they were, in the thick willows by one of the ponds. She was enormous, I swear she was eight feet tall. When they saw us they slowly pushed out of the willows, crossed the creek and stopped, standing perfectly still, on the other side, looking at us while she decided if she needed to take us out or leave us alone.

Roy and Commotion took a good look back at the two of them and then we started to ride on. Badger fell apart.

"WHOA!" Carol had her hands full.

We waited for a minute for Badger to get ahold of himself. Fortunately, the moose was in a good mood and didn't have to kill us. I walked around behind Badger, putting him in the middle for added security and the three of us tip-toed up the trail, looking for moose number three. We never saw him, but I'm sure he was out there. I was mighty proud of Commotion. I know he trusts Roy, and I feel he's learning to trust me too. When the trail crossed the creek to climb up and out of the canyon, Commotion went over and took a long drink and crossed over it like an old pro.

We rode up the canyon in the shade, up a long and steep trail, to the top of a pass and down the other side. Parts of the trail were pretty technical, especially for a young horse. I was happy to be in the back. At this point, I think Commotion believes that if the other horses can do it, so can he.

About four hours later, we were down in Fox Creek. This is a popular trail so it's full of hikers, mountain bikers, dogs and also…. Tiny bridges. We were about a mile away from their pasture at this point and the funny thing was that Commotion kept looking north as if to say "Come on guys! The trailer is WAY the heck over that way!" We came across a few people on bikes (first one startled Roy) and dogs (everyone is so friendly and they all ooh and ahh over the pretty horses). Then we came to our first bridge.

Thank goodness for Jaime and his work with the bridge in the arena. This bridge was skinny and ran over a running creek. We tucked up right behind Roy. Commotion hesitated for just a nanosecond and followed right over, carefully placing his feet. There were three more bridges like this one. He was not relaxed, but he was careful and smart (and brave).

Then we came to the river. We could have crossed the big bridge that crosses the Big Wood River, but we chose to cross the river, since it's late July and the river's not that high and it would be a good challenge. Once again, we tucked right in behind Roy and he braved right up and stepped right in. The bottom is all smooth slippery rocks and the current is really FAST but it's not all that deep, maybe just above his knees a couple of inches. In the middle of the river, he got a little dizzy (this can happen if they are looking at the rushing water) so I lifted his head so he would look with me at the far side. He motored right across.

Through the parking lot and down the forest road, we came to highway 75. It was the height of the summer season and there was way more traffic than normal. We waited there for about five minutes or so (maybe I'm exaggerating). We crossed the road and then what do you know? We were back where he lives. I gave the horses a bath while Carol took David up to get the truck and trailer. When I took them out to the pasture, I took Commotions' halter off first.

"THANK GOD!" is what he said. He dropped and rolled and LEAPT into the air, tossing his head, and trotted over to the water trough.

This was an "A+" day.You might think this is getting boring, but not for me. He was ready for it to be over, so he does have his limits, but he is my little super star! 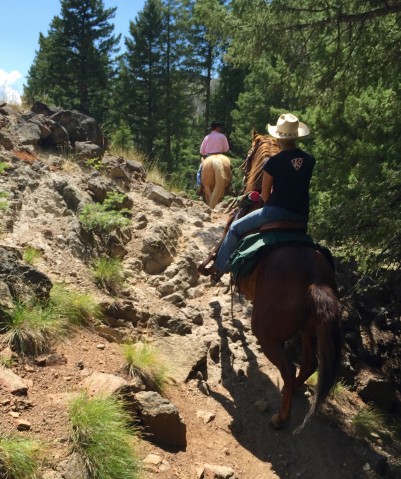 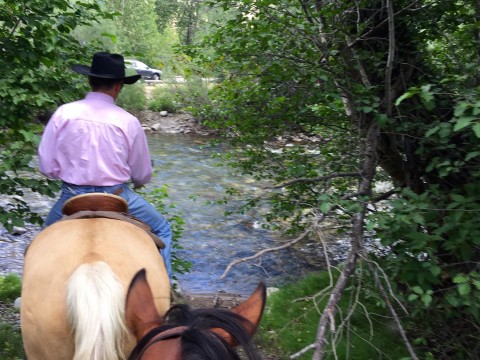 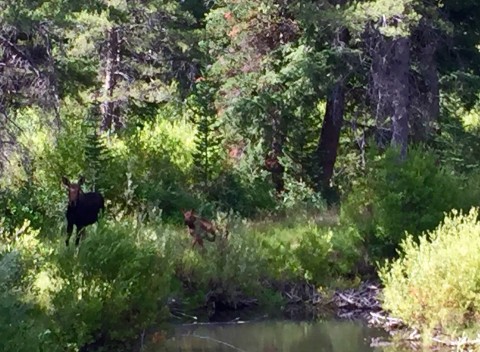