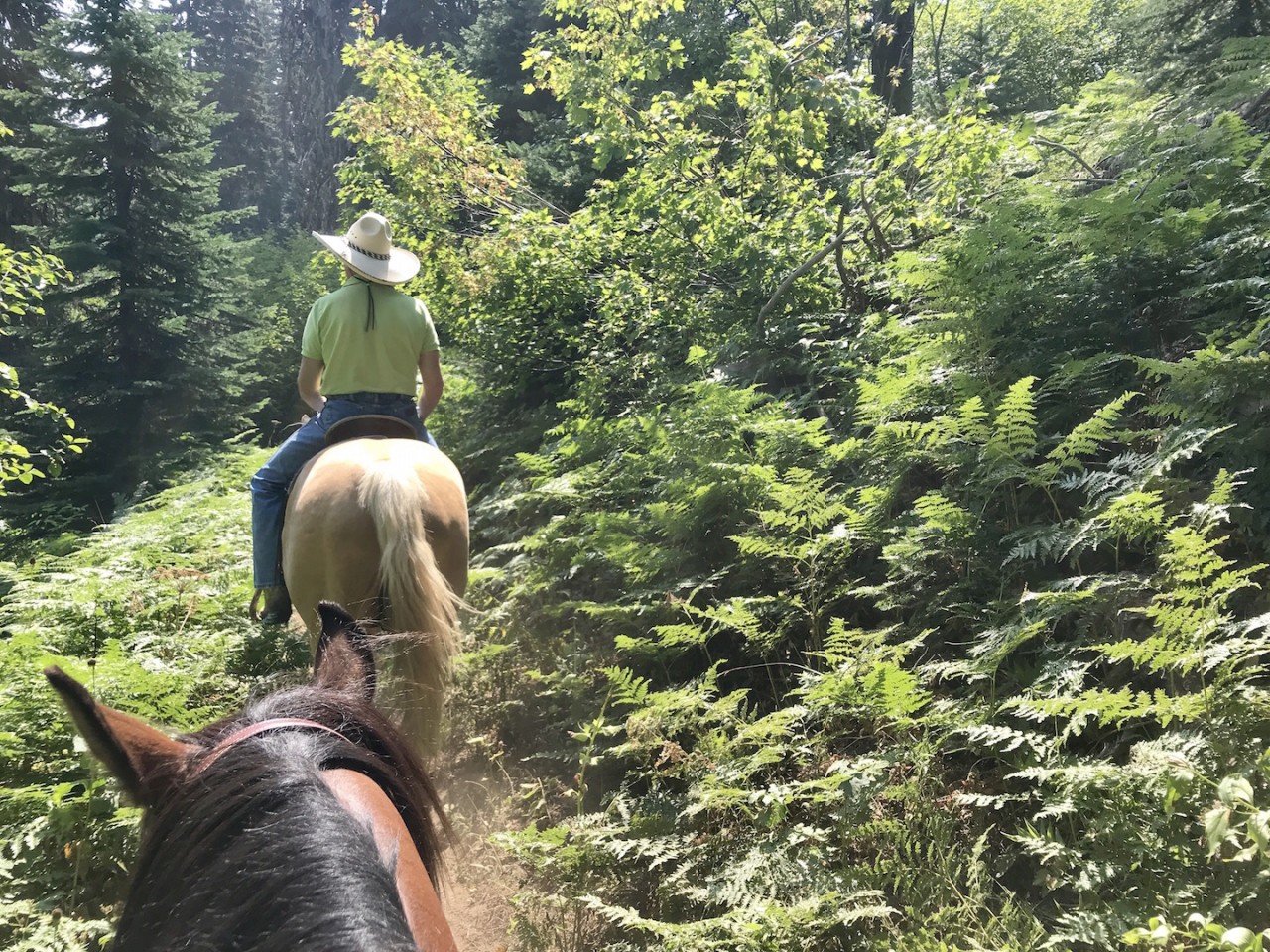 We picked up Roy and Arizona Mac V and drove an hour south and east, past a small town called Tollgate and parked in the Andies Snow Park parking area in the Umatilla Forest. We saddled and crossed the highway, finding the Horseshoe Trail trailhead. Dropping down onto the trail, we followed it through dense forest and ferns. Arizona feels so much older than he did this spring, his body is different, his mind is too. But he is still only three. I reminded myself that as we went along. Some of the last few rides in Sun Valley had wild grasses as high as his eyeballs, so he learned all about eating on the trail, a bad thing in my view. I try to let a young horse alone and not micromanage if possible, but here I was, bumping one rein, bumping one leg, telling him that's not acceptable. He said okay, but then strode up to Roy's rump and went for a little bite, which he thinks is kind of fun (see, he's only three after all). I would ride him straight with his head tipped away from Roy's rump for a while, or slow him down, making a space between us, but after a few minutes I figured he just didn't have enough to occupy his thoughts, so I put him out in front. The sun trickled down on us through the boughs of the tall pines. The air was fresh and cool. Ferns taller than me blanketed the sides of the trail. It was fairly level trail, just following the contour of the mountain. The footing was soft and sandy, with just a few little water crossings. We rode for about an hour or two, stopping at one point to look over the distant view. Smoke from the fires in Canada have drifted down and settled in and around Walla Walla, so the view was not what it could be, but was still darned impressive. Big country up here. After we turned around to go back, I put us in front again. We were going along nice and relaxed when a mountain biker appeared, coming at us at a good clip. Smart little Arizona did spook, but spooked right in place, standing his ground as the biker slid to a stop, got off the trail, saying hello. We walked past him, on tip toe, neck arched, head tipped toward the biker, and then went on. A minute later there was a large tree stump (what made it different from the other hundreds of tree stumps he's seen, I don't know), he stopped. He backed up. I motioned to David and he and Roy walked past us, so we then were behind and it was no big deal. It was like a delayed reaction to the biker. To the left of us and downslope, there came a cacophony of bird sounds. He stopped again, wondering what that was about. It was loud and for a moment even I wondered if it were birds or something else. These are definitely not Sun Valley nor California birds. We stood still for a few moments, letting him figure out that it was not something coming up to eat him, then moved on. About ten minutes later, we got back in front, leading the rest of the way back to the trailhead.

Back on the road, we found a little log place with a sign out front that said "Ice cream". This is real important to David. Looking in the window at all the flavors, I saw Spumoni. I haven't had that flavor in decades. Life is so full of little discoveries.

At home, I pondered Arizona's behavior. He's grown up so much this summer and has had some fabulous experiences. He's tried his hardest to be good, to be brave, to be agreeable. We've traveled some good miles. He deserves a nice long vacation soon. What a good horse he is. I am totally smitten.