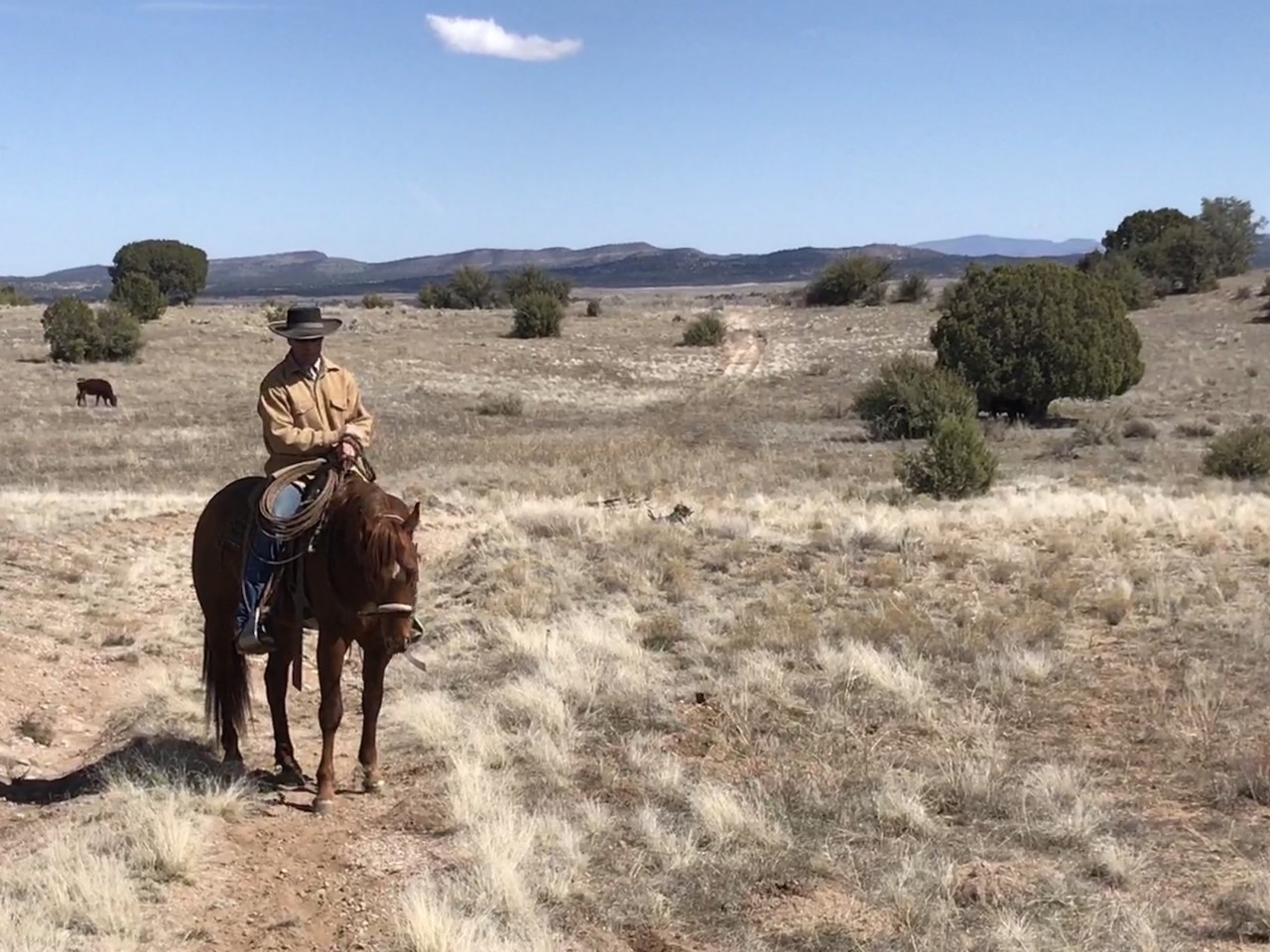 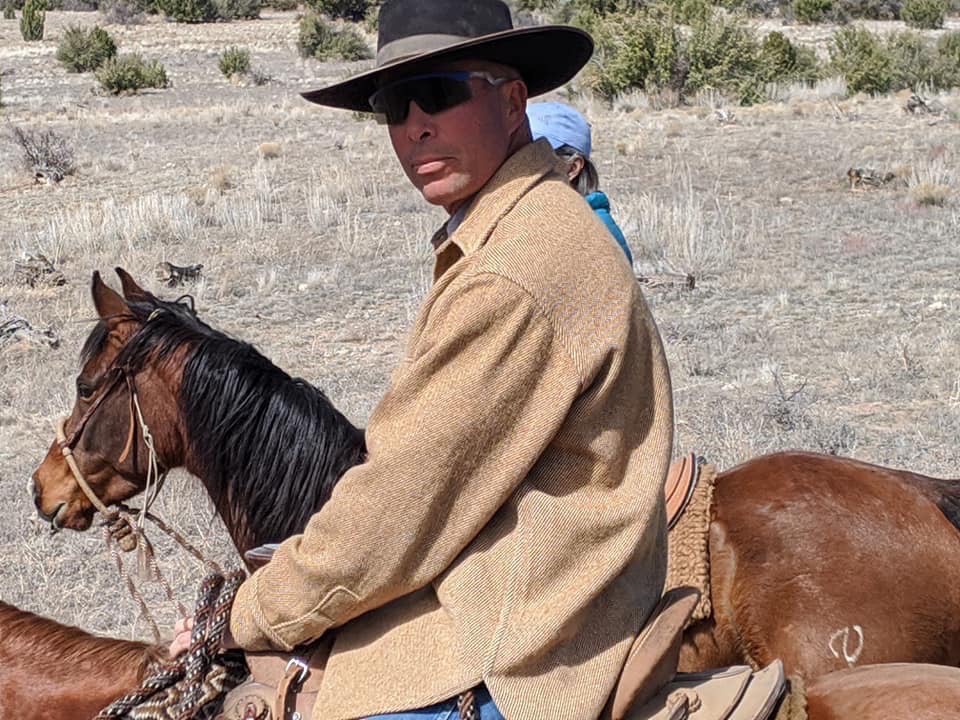 He is simply brilliant… and humble, and well-read, (and not at all hard to look at, either).

He'd picked up Arizona Mac V the end of October after he and Bruce Sandifer had put on a California Bridlehorse workshop in Walla Walla, Washington, and taken him home to Colorado. There, he'd ridden him in the snow, hauled him to the fairgrounds, ridden out after cattle, and just ridden him right, in balance, and with grace. In January the Derby family moved to their new home in Prescott, Arizona. Yes, Arizona was in Arizona, and I was eager to see how he'd matured in six months.

"I hope he's been able to put the time on him that I was hoping." I said to Karen at 37,000 feet somewhere over the Nevada desert. Her horse, Brego, had gone to Colorado as well and we were on our way to visit, escaping Walla Walla's cold March weather.

Walking up to his pen, he lifted his head, perked his ears, and came over to me, intently sniffing my head, my shoulders, my hands, my jacket. "Is it you?" He seemed to say. I like to think he doesn't react to everyone like this, but that he remembers me and feels some affection for me. He certainly was more fit. His top line was stronger, his hind end more muscular.

Jeff brought out both horses, saddled them up and rode them for us, showing what he's been working on for the last six months. Karen and I both stood watching, with our hands in our pockets and our mouths open. It was so beautiful. I knew Arizona was athletic, and the way he moved brought a little tear to my eye.

"I want to do that." I whispered to Karen.

The next day, we got there around 10:00. It was the one day promising good weather. Jeff was riding a very nice looking little stud horse that he has in training. We rode in the big sand arena, with the vast high desert views of the jagged mountains of Prescott to the south of us and puffy clouds overhead. Karen and I distorted our bodies, trying to grasp what Jeff was telling us, about our how changing our posture/weight and balance affected the horse. Instead of "Hold and Release", his instruction was "Ask… and Allow." We fumbled around for an hour or so, then decided to ride out while the weather was still warm and dry. Rain was forecast for the next few days. Out there, in the big open spaces, we rode through sand, between bushes, Joshua trees, and a number of bovines. We rode and talked, while Bella, his black and white border collie, skipped along at our feet, exhibiting joy as only a dog can do.

The next couple of days, with rain falling on the roof over his covered arena, Jeff (again and again) repeated and clarified his message.

"Inhale, exhale, jiggle the rein, rock your body a little, crunch your obliques, contract your abs, LESS IS MORE."

"OH!" It was an "aha" moment. "This is like dance class, (isolation exercises), where you keep your hips and shoulders still, but move just your ribs to one side or the other!"

The last day we were there, we asked Jeff to ride our horses once more, and review everything we needed to figure out. He rode Brego (who is a tall, very handsome Morgan horse), once again putting him up into a dance, light and quick and smooth. He stepped down, patting his big neck. Brego had such a contented look in his eye. It was so easy for him, with Jeff.

"I want to show you something." Jeff said, handing the mecate to Karen and walking back to his trailer.

He came out with a bosalito and bridle and explained once again the why and how of this method. Why your hands need to stay in the middle, not reach out to the side, how the horse finds the sweet spot in the bridle the exact same way as he finds it in the hackamore.

"You never want to put a bit like this in a horse's mouth until he's 5 ½ years old, their teeth are not yet right."

He swung back up into the saddle and we watched, as Jeff went through the same movements he'd done with the hackamore, watched as Brego figured out how to hold his head, not low down, not high up. Jeff just rode, letting him figure it out. He showed how, with the bridle reins loose, he used the bosalito reins for the signals, and let the horse just carry that bit.

"When you can ride pretty much one handed", he said, "you can shorten the bridle reins so both the bridle and bosalito are giving the same signal at the same time." He slid the bridle reins up in his hand. "If you need to help him out, you can pick up the mecate and clarify the signal."

Once the horse really has it figured out, it's okay to move up to a spade bit, or to leave out the mecate on your bosalito and ride just in the bridle.

This is an art form that was born in the early days of California. This feeling that Karen and I felt just a glimpse of, is what captured Sheila about this method, under the tutelage of Sid Spencer. "Like cutting through butter with a hot knife" is what she'd said.

I can picture Sheila and Jeff, huddled together, talking tack, talking method, horse psychology, horse physiology, telling stories, cracking jokes. They so would have enjoyed one another. 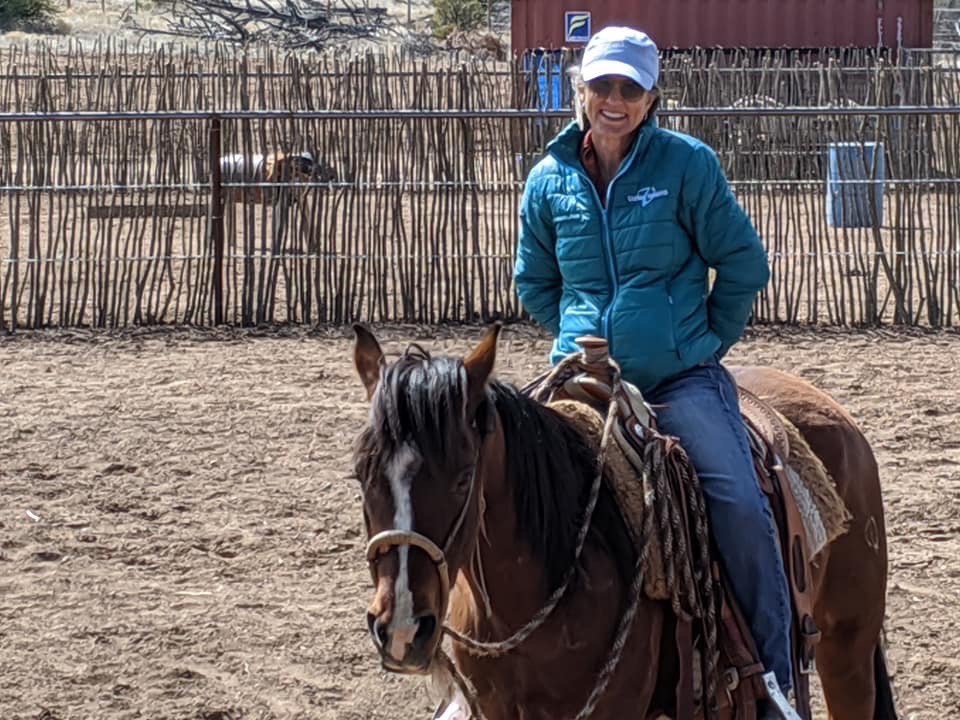 ​If you would like to know more about Jeff Derby and the methods used in the California Bridlehorse tradition, go to: https://www.derbylivestockcompany.com/