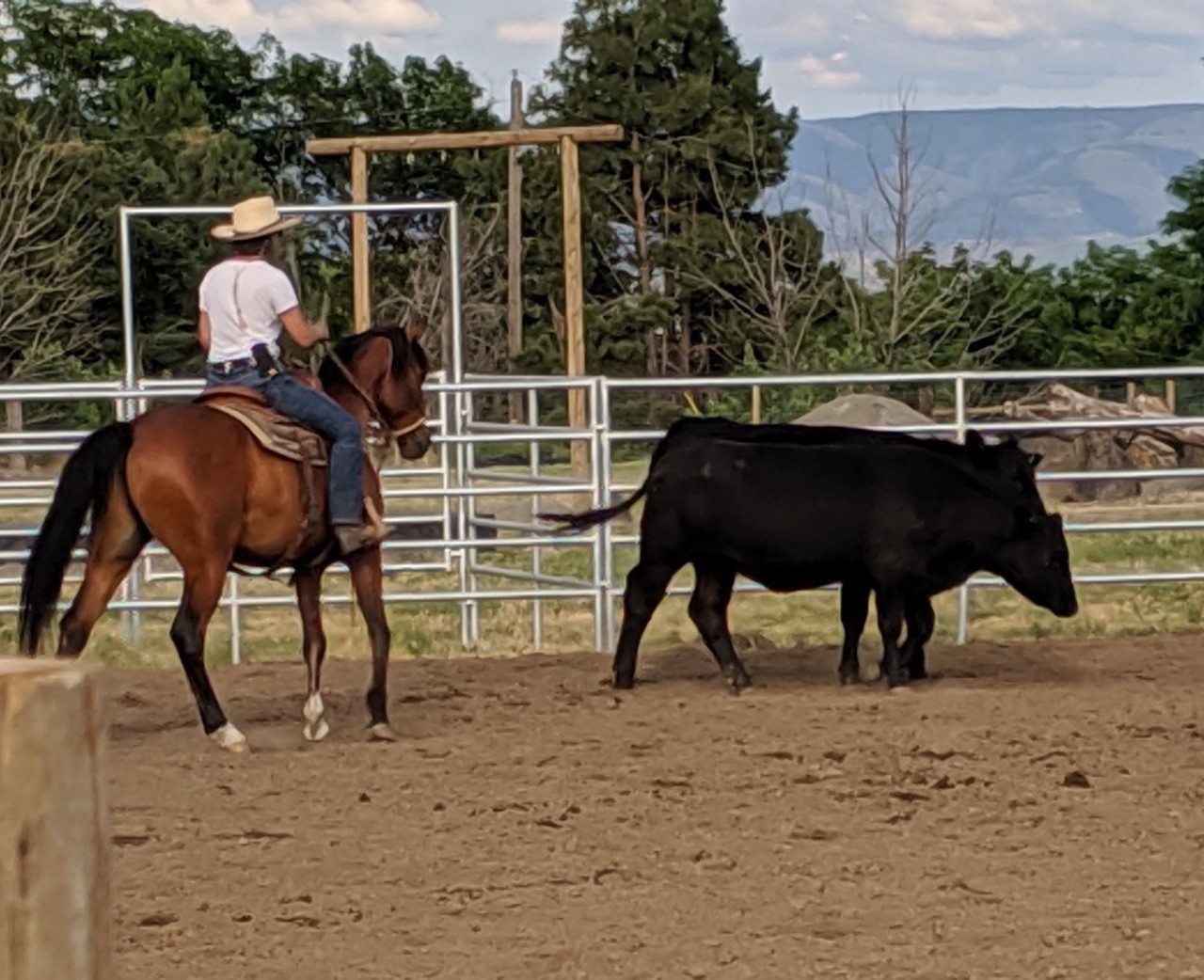 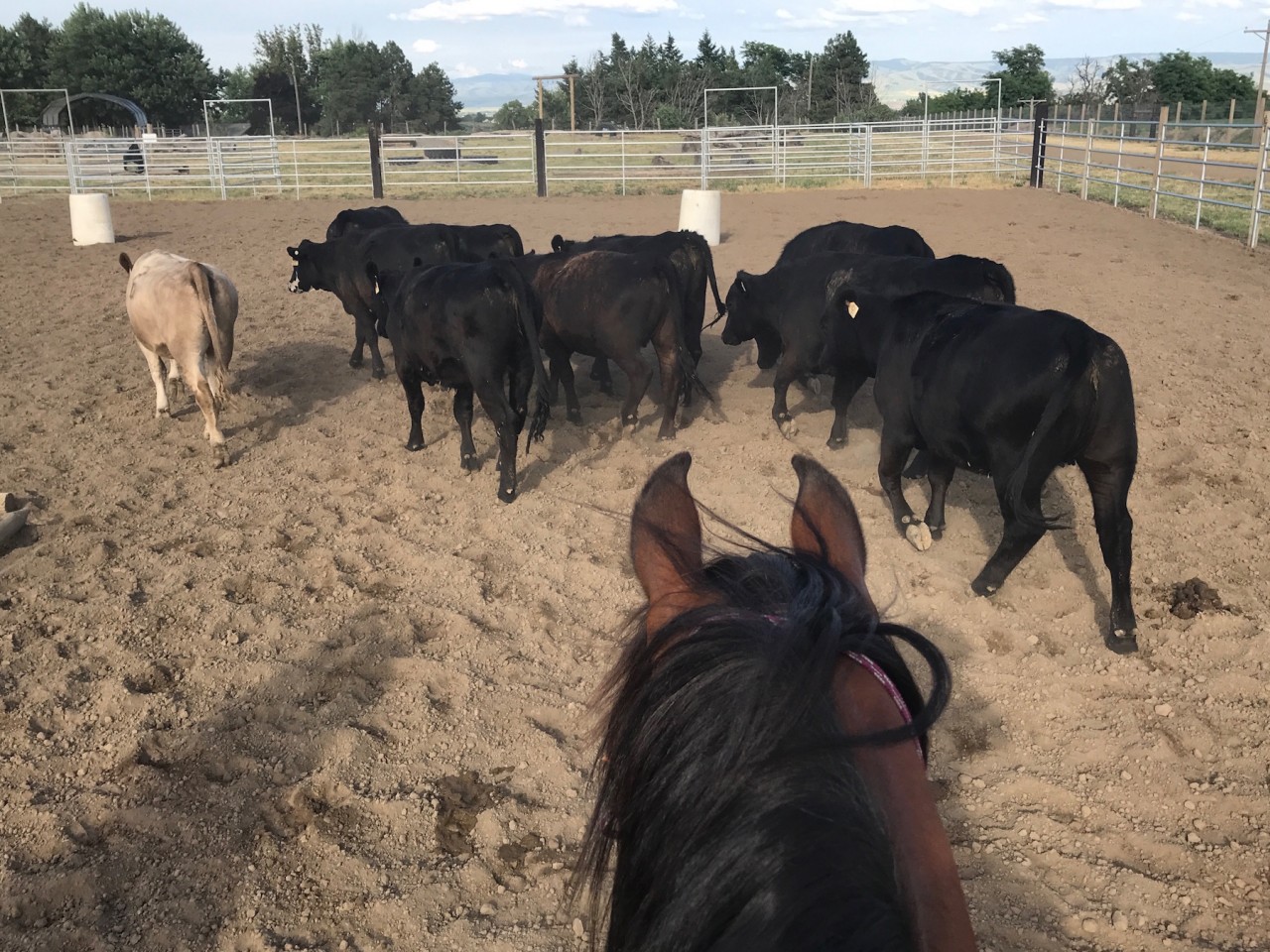 It had been a whole week since I'd even looked at Arizona. A short trip to Seattle followed by three days of intense work requirements took up every minute of my days. Finally it was Saturday. After a leisurely breakfast with friends at the Farmer's Market, I said hello to him, burying my face in his mane, rubbing my hand over his perfect back and hip. It didn't take much groundwork before he was right there with me, so I gave him a bath and put him back out in the pasture with Roy. He rolled in the green grass and shook. He felt ready for our little clinic in the evening.

It was a two and a half hour introduction to working cattle. It sounded like the perfect scenario. Slow and easy. He'd seen cattle before, first at the V6 Ranch, but all he'd done was follow John Varian through the herd, one time. Another day, with the Phinneys, we'd slowly walked through some cattle grazing and dozing on the mountain top. This was going to be different. We got to the WBarM ranch a little early, took a look at the ten heifers dozing in the pen, met one of the other two participants, and saddled up. Heidi Thomas, our teacher, runs hundreds of head of cattle all over, from the high country in the Blue Mountains, to large plots out by the Columbia River. She had a number of exercises in mind for us to do.

We stepped up to the little herd. Arizona was tight underneath me. I gave him a little time to think, and look, and asked him again to step closer. He was hesitant, but trying to be brave. As one cow bumped his head into the side of another, making a "whuph" sound, BOOM we were five feet away facing the other direction. Boy, he's quick! We turned back to the cattle and Heidi rode in beside us for support. For this exercise, we had to cut out one cow at a time, take it from the herd through a gate, into another pen. On the third cow, Arizona seemed to need a moment to reassess the situation. He stretched his neck toward the cattle a little, his ears alert, his eyes focused, looking intently from one cow to the next, thinking hard. Then he exhaled a deep breath and we went on, I guess he decided it wasn't really that big of a deal after all.

A number of times, I was glad that I stayed in the saddle, as he swooped to the left or the right, after a cow did something he didn't expect, but he's so smooth when he moves, it just made me laugh.

Heidi switched it up every time, sometimes only one cow, sometimes two or three, sometimes the whole herd. Sometimes it was only one of us at a time, sometimes it was two of us, and sometimes it was all three together. One of our last exercises was for each of us, alone, to cut out three cows from the herd, take them together through the gate to the arena, circle them together around a barrel, then drive them down to a place where Heidi had placed four poles, making a box on the ground. Our challenge was to get all three into this little box, barely big enough for all three to stand in, and stop. Then we were to turn them and take them back out, circle the other barrel, and back to the herd. By this time, he was much less afraid of the cattle, and when that third cow stepped into that little box on the ground with the other two, I felt like I'd won the blue ribbon.

As the lesson wore down, Heidi had us box a cow at one end of the arena. The first cow I picked was a little jumpy and once again I had a couple of blasts to the side, but each time we faced back to the cow and then followed her around at a trot. Arizona started to understood the program, and know that he could make the cow move instead of the other way around. We put that frisky one back and picked a more docile one to work with. We finished up as the sky filled with pinks, purples and deep blues, the wispy white clouds high in the sky.

Taking his saddle from his back, I thought of Sheila, how she so loved working cattle, I could hear her laugh, watching Arizona and I, as he zipped out away from the quick moves of the heifers, I could feel her delight as this little colt thought hard about this lesson, and figured things out so well. Twisting her ring on my finger, I sent a little thank you to her, for making my Arizona Mac V, and for continuing to bring me such joy in life.