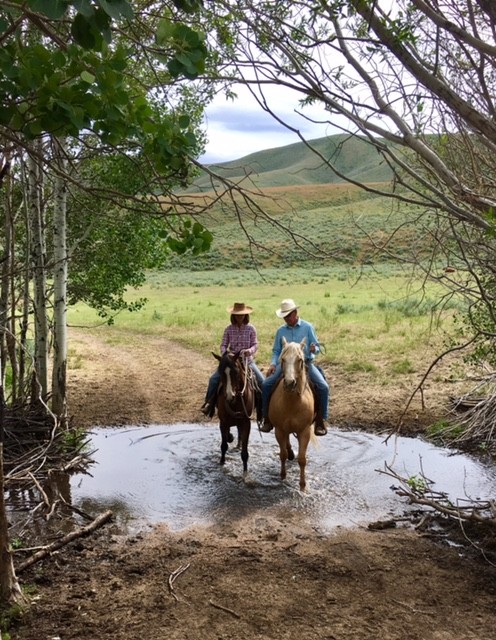 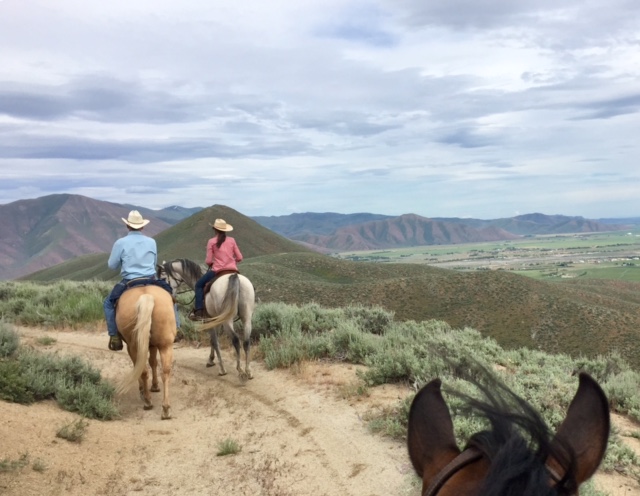 This horse is so smart. I have ridden almost every day, sometimes little shorty rides and sometimes bigger challenging rides.

This is about one ride, about a week ago. David and I loaded up the horses and drove down and picked up Martina and her "V" horse, El Tejon. We went out to a canyon that I'd never been to before. We rode out through a couple of gates, riding through the sagebrush on a dirt road. Between gate #1 and gate #2 we picked up the trot. Prestigious was in front and went along pretty nicely for a young guy that hadn't been out for a few days. The other two trotted along behind us and all was pleasant and well. We rode through a group of cattle and came to a wide water crossing. Prestigious made it though, after the other two horses, but it certainly was not pretty, he splashed and scrambled out the other side, so we went back and did it again. Boy, this horse is smart! The second time he walked along side Roy at a normal walking pace, he was tight but he'd already figured it out. Third time across was like he'd done it a million times. We climbed and climbed up some very steep sandy hills to an old abandoned mine, then followed the mining road east, holding on to our hats, as the wind up there was really howling. The only thing that Prestigious looked sideways at was a little shepherd wagon on the top of the hill. I was happy there was not a band of a thousand sheep to deal with, one thing at a time. This was Prestigious biggest ride to date, time wise and climb wise.

The trip downhill was long, very long... and very steep. Most horses when they first get outside have a little difficulty with the downhill, but they get over it. I rounded his back up, getting his feet underneath him on the steepest parts. We all still had our hands on our hats and the wind probably was not making him any happier, but he made it to the bottom without any real fuss. We went over to a water trough, sitting out in the middle of all the cattle, dozing in the afternoon sun. This was one weird looking water trough. Made out of a giant machinery rubber tire, with a bobbing float in the middle, that made noise when the water moved, and of course, the circle of mud at it's base. Prestigious walked right up and took a nice long drink. He was thirsty. After walking through and around the cows, we trotted off ahead from David and Martina, then loped on down the road to the gate. He has such a lovely lope, like silk. He stayed nice and relaxed the whole way.

When he's a little overwhelmed, he shakes his head, like there are flies biting him. He only shook his head a little bit going down the hill and at the end, when he thought he'd just conquered the world by climbing and descending those hills he was mighty proud of himself. Little does he know that he's got a lot more work ahead of him. It's such a joy to ride a horse like this. 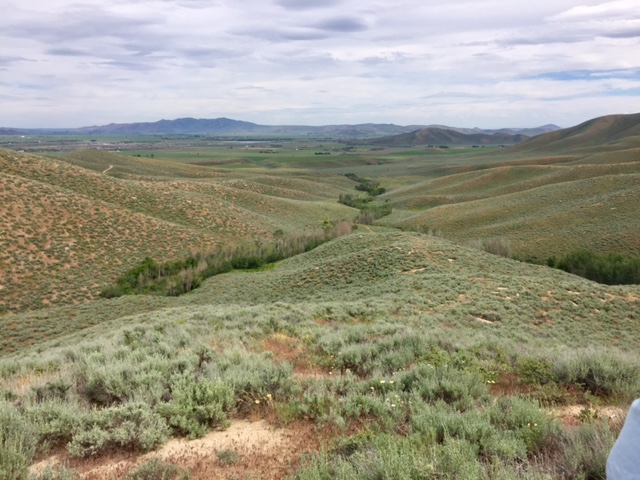