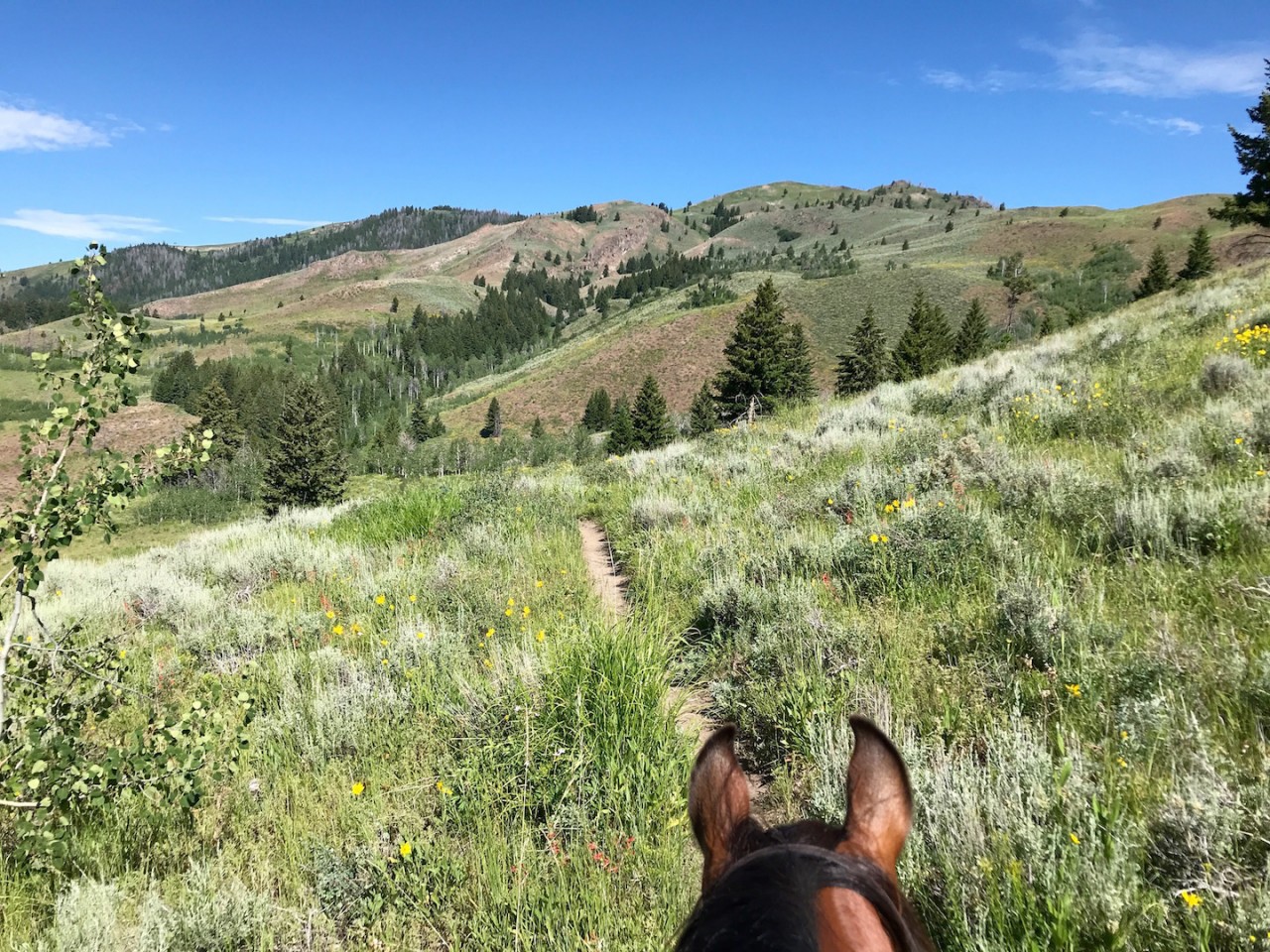 It was going to be a hot day. I checked the sheep report and even though they said there were sheep in the area of the Lodgepole trail, which lay at the end of our route, I figured they would be tucked up into the canyon and not in our way. If we did run into them, it would be at the end of a pretty long ride and I figured Roy and Arizona could work through it. I also like the Cow Creek trail because it starts out with a long steep climb for about two miles, then we'd have about seven miles of fairly level or easy downhill, with lots of water crossings.

We left the trailer at about nine in the morning, and followed Roy up up up. The wildflowers got better as we climbed. Bright yellow arrowleaf balsamroot, purple mountain lupine and delicate little white wild lilies were everywhere. Arizona felt really good underneath me, balanced and happy. The first water crossing, he stopped and took a big long drink. I believe he truly enjoys the great outdoors. From the water crossing just beyond the first trail intersection, the trail meanders over and through a number of slopes and eventually drops down into the Lodgepole canyon. He's taken on a little brother role with Roy, and he loves to sneak up behind him and bite him on the butt.. only now, since he knows he'll get into trouble, he only pretends like he's going to bite him, and then jumps back and throws his head in the air as if he's been reprimanded. It's just him amusing himself really, just thinking about how great it would be to take a big bite out of that big yellow rump. The best way to deal with this, in my mind, is to get out in front. This makes him pay attention and stop goofing off. He walked on out, pretty bravely, hesitating only for a moment to take a quick look at a big rock or a fallen tree. Many of the water crossings on this trail are sort of hidden in thick brush in the elbow of a wash. If he stopped at any crossings, I'd just let Roy come on by us and as he passed, Arizona stepped on through as if he always really intended to that anyway. No drama. Only one time, after a leap across a tiny creek, did we go back and revisit a crossing. On his second try he did perfect. With each water crossing he felt more confident.

He's getting his body under him going down hill, too, which is certainly good to feel. At one point, we heard a couple of motorcycles headed our way. This always strikes me as a little painful, as we're up there in the wilderness, miles from anywhere, with nothing but bird song and rushing water or the breeze to listen to. These big engines roaring up toward us.. well, it just doesn't seem right. BUT these guys (and girls) on their motorbikes, clear out all the fallen trees on the thousands of miles of trails every year. We might never get any where without the work they do, so that makes them our friends. Proper trail etiquette is for all other trail users to step off the trail and give horses the right of way, and 99% of the time, that's what people do. The motorbikes are especially respectful. They steer off the trail if they can, and turn off their engines, and talk to the horses. We had stepped upslope from the trail when we heard them coming, since it's easier for us to get off the trail than them. When they saw us, they clicked off their motors, saying hello. While we talked and thanked them for clearing the trail and what a glorious day it was, Arizona looked them up and down, but didn't seem concerned at all. They started their bikes back up and off they went. We marveled at how crowded the parking lot was, and that these motorcycles were the first people we'd seen all day.

We never saw the sheep. As we got closer to the bottom, there were more hikers, more mountain bikers, more dogs. None of it mattered a bit to Arizona, he just smiled at everyone and walked on, enjoying the sunshine and the sweet mountain air. He did dip his head at one little dog, but that was it. Just a dip, not a threat. I just can't imagine a nicer day. We were back home before noon, when it started to get pretty darn hot.

This was a good nine mile trail, his longest ride yet, with some good hills for developing that hind end of his. He did great, so well that I thought, well, maybe I'll give him a couple days off to let him rest, see if he's tired or sore in the morning.

A little while after I fed them in the morning, I went out to see how he was feeling. He left his food and trotted right over to me. "Where are we going today?" He seemed to say. Jubilant, that's a good word for how he seemed to feel.

How good is that?