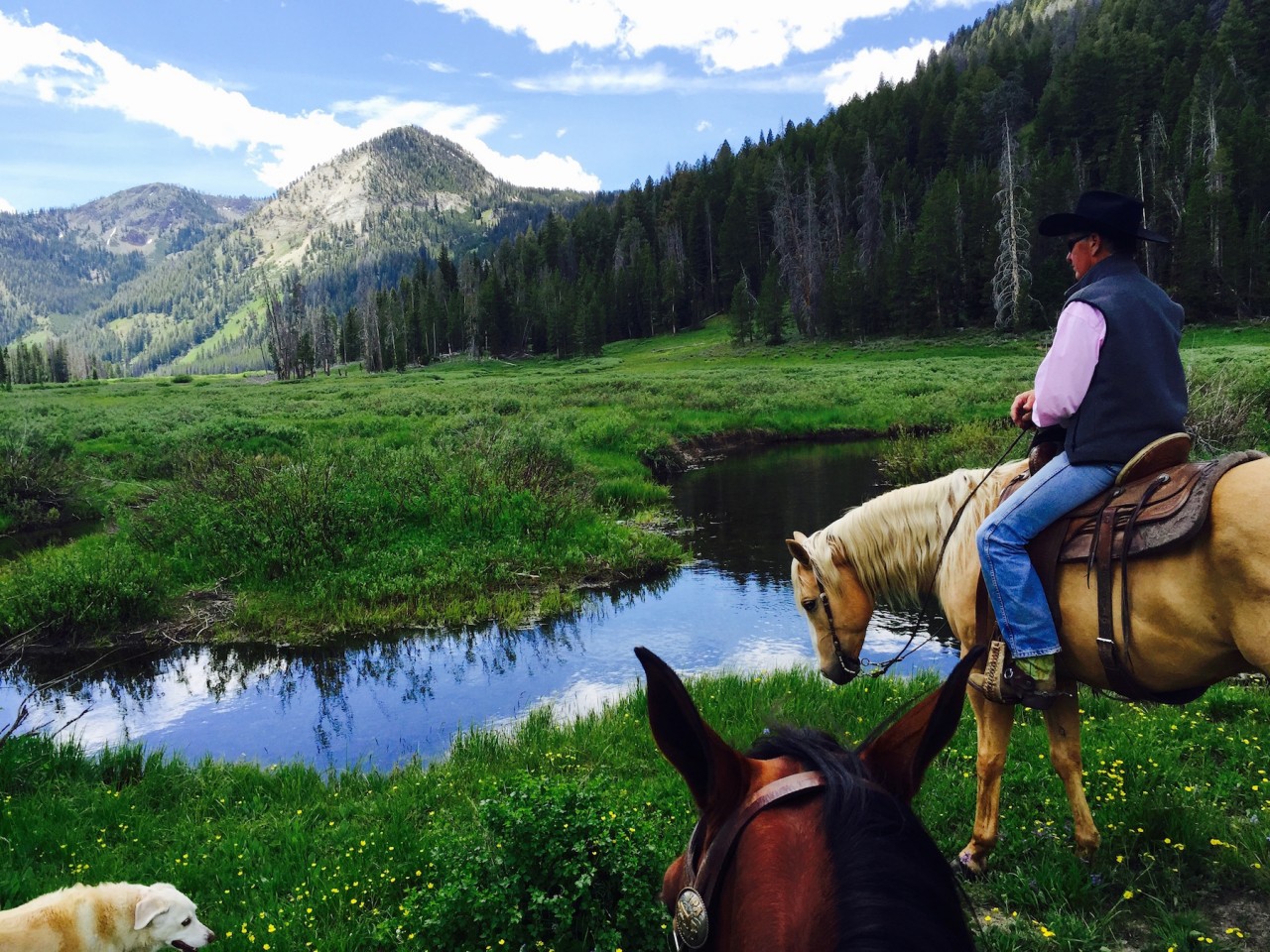 The temperature at Smiley Creek, where we were headed, was 34 degrees. It was only 8:00AM but I knew it would take some time to gas up the truck and get ourselves up there. By the time we saddled the horses, near Chemeketan campground, it was almost 10:00 and 50 degrees. No wind. Perfect. Quiet. Peaceful.

My main objection of the day was to get Commotion V comfortable with water. Chemeketan campground lies right next to the Salmon River, close to it's headwaters. This mighty river that flows all the way to meet up with the Columbia River in Washington State, is only creek size here.

Before we got started with the water, we rode out into the open country, through sagebrush and willows, over gently rolling hills, then into the forest. Following Roy, we stepped over downfall laid out like pick up sticks. Our dog, Lily scampered at our feet in search of squirrels. Commotion seemed to be having a good time of it.

We wandered down to the Salmon River, running clear and fast, with a sandbar that jutted out into the water. Roy went into the water, but Commotion halted at the edge. The dog jumped in and took a long drink, looking up at Commotion as if to tell him it's all okay. Here was my opportunity to try out my new theory for learning about water. Roy came back and circled around us and went back in the same way, the same place. He did this a number of times, each time going all the way around Commotion's behind and into the water. Roy never stopped moving. Each time Roy passed us and went back in, I could feel Commotion wanting to follow. I could feel the pull on Commotion instead of resistance. Each time as Roy passed by, I would tap with my feet and kiss to him. If he refused that was okay, we just waited again for Roy to come back around again. We didn't fight or argue about it, we just kept that flow of energy going through Roy. After he circled us four or five times, Commotion rose up and made a big leap right into the water behind Roy. I think he surprised himself. We all stood still for a while so he could think about it. I petted him and we watched Lily swimming in the deeper pool to our right. Do dogs smile? (Mine does) When he seemed relaxed about the water around his ankles, we took a few steps forward into the water, still following Roy, where it was a little deeper, almost to his belly. Turning around, we retraced our steps and walked out the way we came in. He was a little bit electric, but he seemed more excited than frightened. I was elated.

We traveled around the countryside and found ourselves back at Chemeketan campground where a side creek crosses the road. Commotion stopped. Once again, Roy circled around us. On the third pass, Commotion braved up (I could feel this, like he took a big breath) and made a little hop into the water, followed by splash splash splash as he walked nicely across the creek. Such a good boy.

The creek and the river offered plenty of different crossings. We snaked around, crossing here and there about twenty times until he felt nice and relaxed about it. There were two places that we tried that were to advanced for him at this point so instead of undoing what we'd accomplished, we just went and found another spot that was easier.

I just about petted the hair off him today. He's a little superstar. 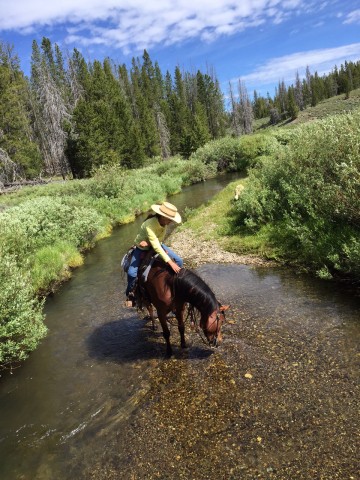