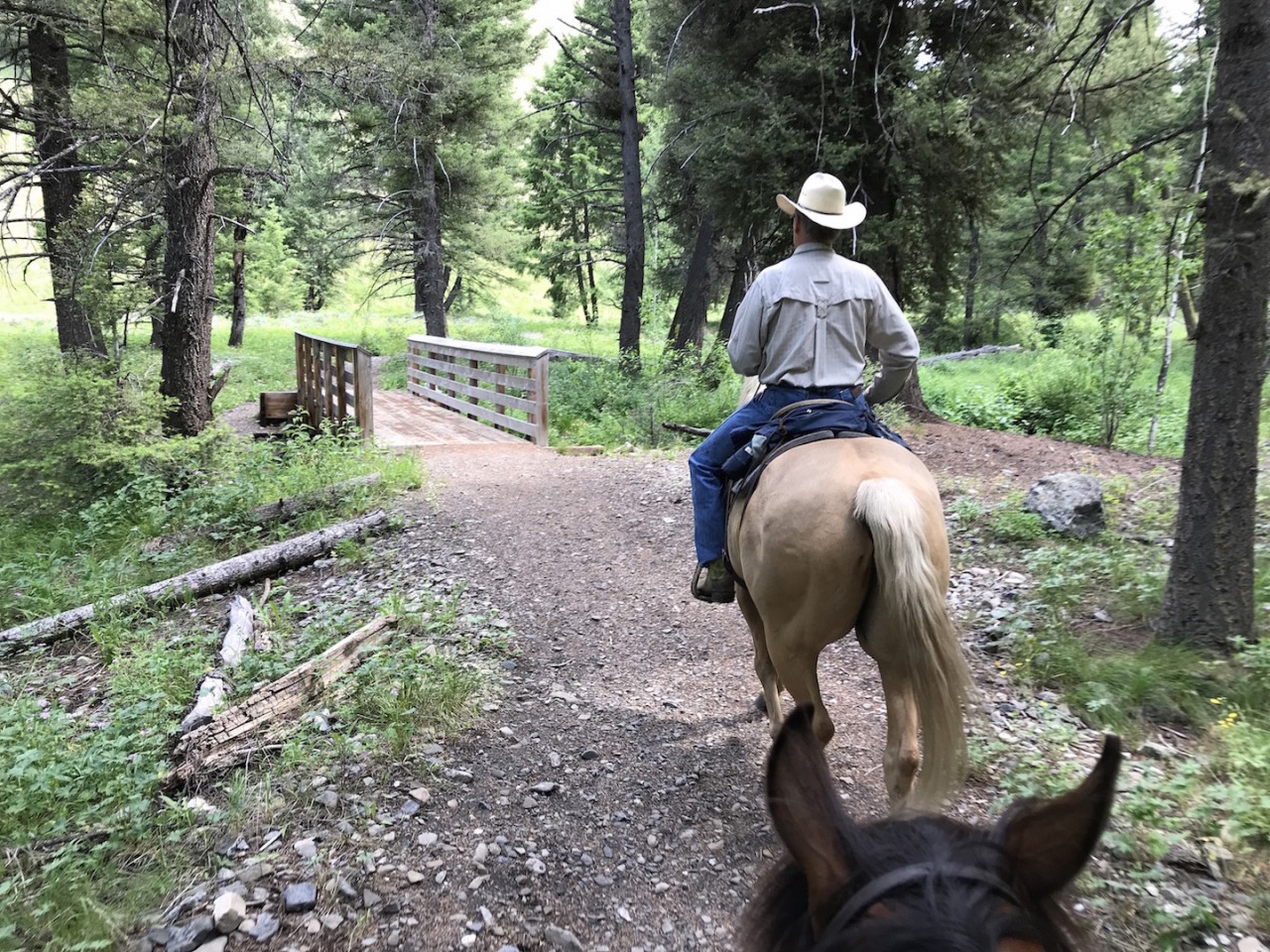 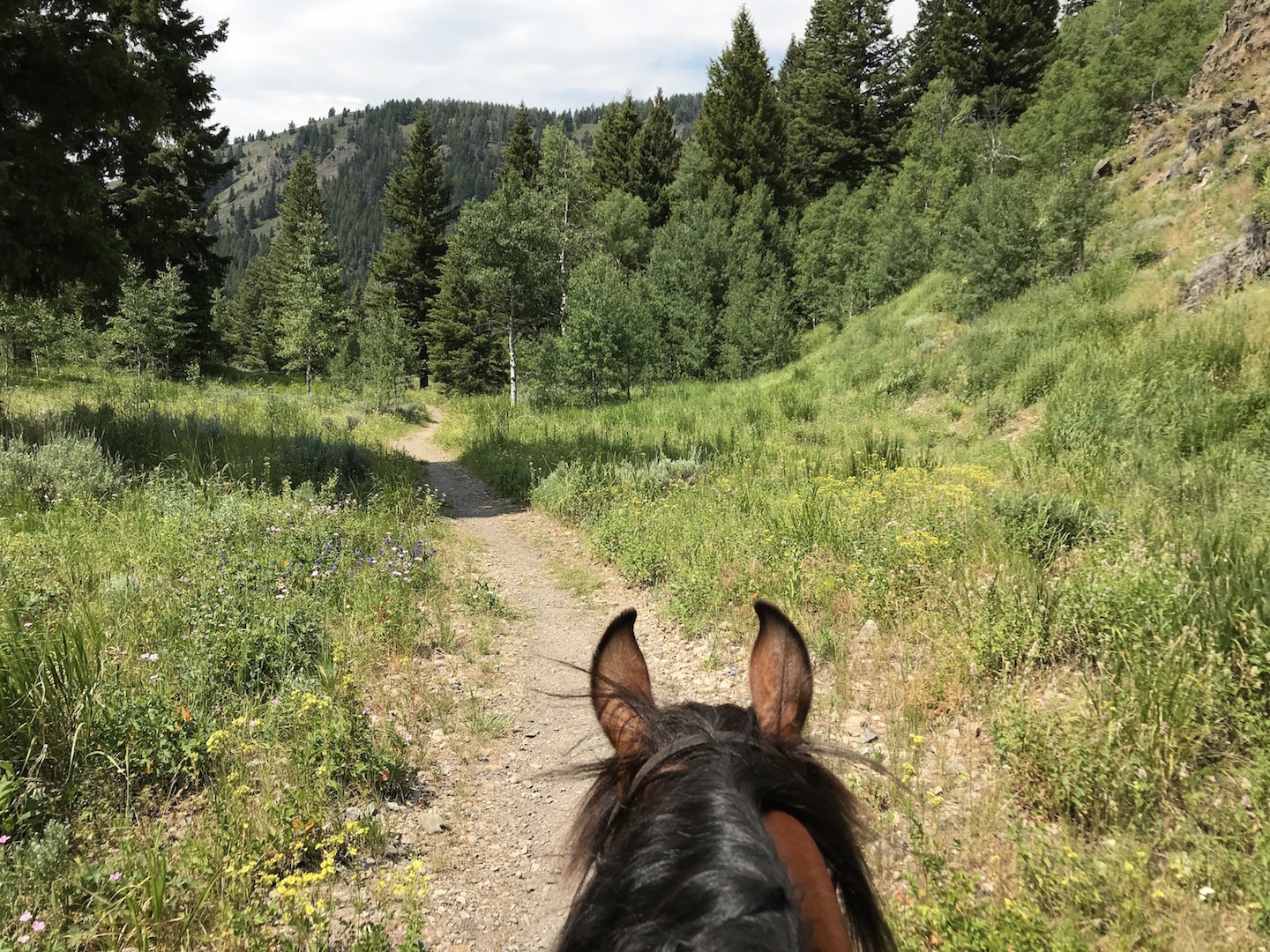 We had to take a little trip out of town for a couple of weeks, so the horses had a vacation out in a large pasture with good green grasses to their bellies. When we got home, we decided on a short ride at a trail I hadn't been on in over a decade. I seemed to recall that it was a little rough, but a friend had hiked it and the trail report said it had some new bridges. I wanted to introduce Arizona to bridges and this looked perfect. Murdock creek is just a short drive north from their pasture. The trail started out wide and flat with tall trees. There were three big new bridges that spanned the creek. Arizona hadn't seen any bridges other than the one that Jaime uses in the arena. He paused a moment behind Roy, braved up and marched right on across. About half way, he froze up, hesitating at the sound of his steps on the boards, and the sound of the creek rushing under his feet. I squeezed my legs on him just a little and he kept on going. We went on, soft footfalls sounding on the dark forest floor, birds singing all around. After about a mile, we came to the spot that renewed my memory of why I didn't really care for this ride. You might know that steep doesn't really bother me, and a narrow trail on the side of a steep drop off doesn't bother me too much either, but a steep narrow trail with crumbly footing bothers me. We followed Roy up, me standing on my stirrups holding on to his mane, reaching the top of the slope at a slow lunging gallop and scramble. The nearer we got to the top, the more concerned he became. Once at the top, he shook his head two times, shaking the worry and stress from his brain. Then he was fine. The trail continued on along the side of a steep hillside, the dirt still crumbly beneath our feet. Normally this sort of thing is short lived and then gets better, but as we continued on I felt less and less enthusiastic about where we were headed. We came to another steep narrow climb and I stopped.

"I don't like this." I said to David. "The trail seems to be degrading and I feel this is over his head".

So, we turned around and headed back after only about a mile and a half. As we approached the steep crumbly narrow downhill, I considered my options. I could ride down, which would be the brave cowgirl way, but he could flounce like he has done before on much less of an incline, and step off the trail. I could lead him down, but he could flounce and run me over because I knew it would be a small crawl down for me in my cowgirl boots. Or, I could ask David to lead him down. Think about it, would you rather walk down a steep narrow trail by yourself.... or with a fifty pound backpack on your back? I figured he was probably best handling his own body without me on top of him or in front of him, so this would be the easiest for him, and the safest for me. I took a deep breath, swallowed my pride, and said to David, "I think I'd like you to lead him down and I'll walk." He agreed.

He is improving getting his body soft to go down the hills, but this was very steep. He did flounce, he tossed his head, he sort of slid his feet around, but he stayed right behind Roy and on the trail (good boy). They waited for me to side step down the hill. Back in the saddle, we walked pleasantly back toward the trail head. One thing about this horse (I believe this is a Major Mac thing), he doesn't hold on to his fear. When something startles him or gets him rattled, as soon as it's over, he's over it. By the end of the trail, he was bravely crossing the bridges in front of Roy, his body calm, his eyes and ears alert.

Since our ride was cut short, we returned to Eagle Creek, just down the road a couple miles, and played in and out of the creeks and waterways some more. I always check the sheep report before heading out, and they reported a band of sheep the next canyon over, but here we found a little sheep wagon, with a stake for the sheherd's horse, but no sheep, no horse, no shepherds. We went over and inspected the wagon and then moved on. We got into some knee deep water and slid down some banks to get in and out of the creek, and that was enough for the day. We had a bigger plan for tomorrow, so we headed home.

He's a fast learner. This is so darn much fun! 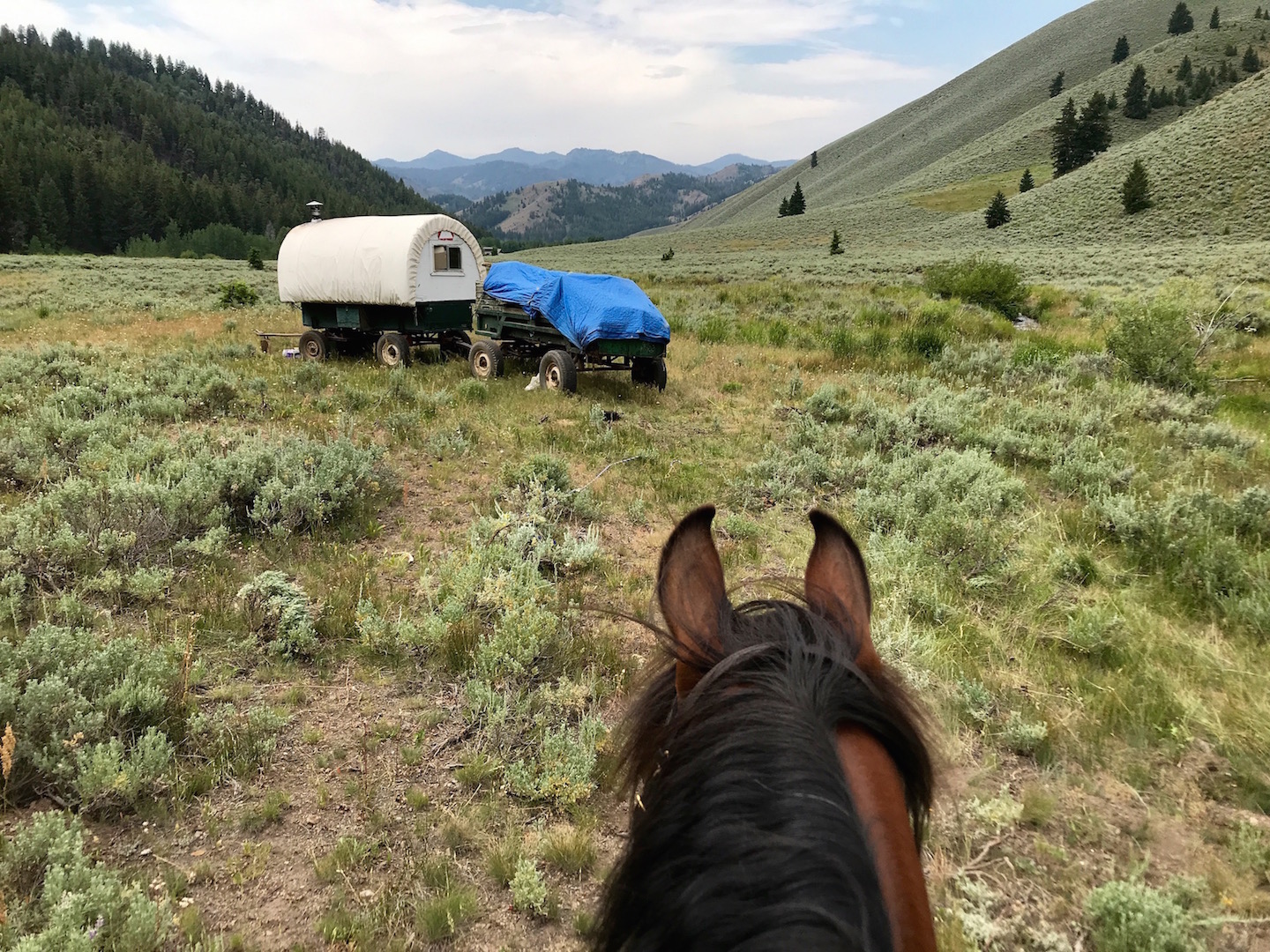