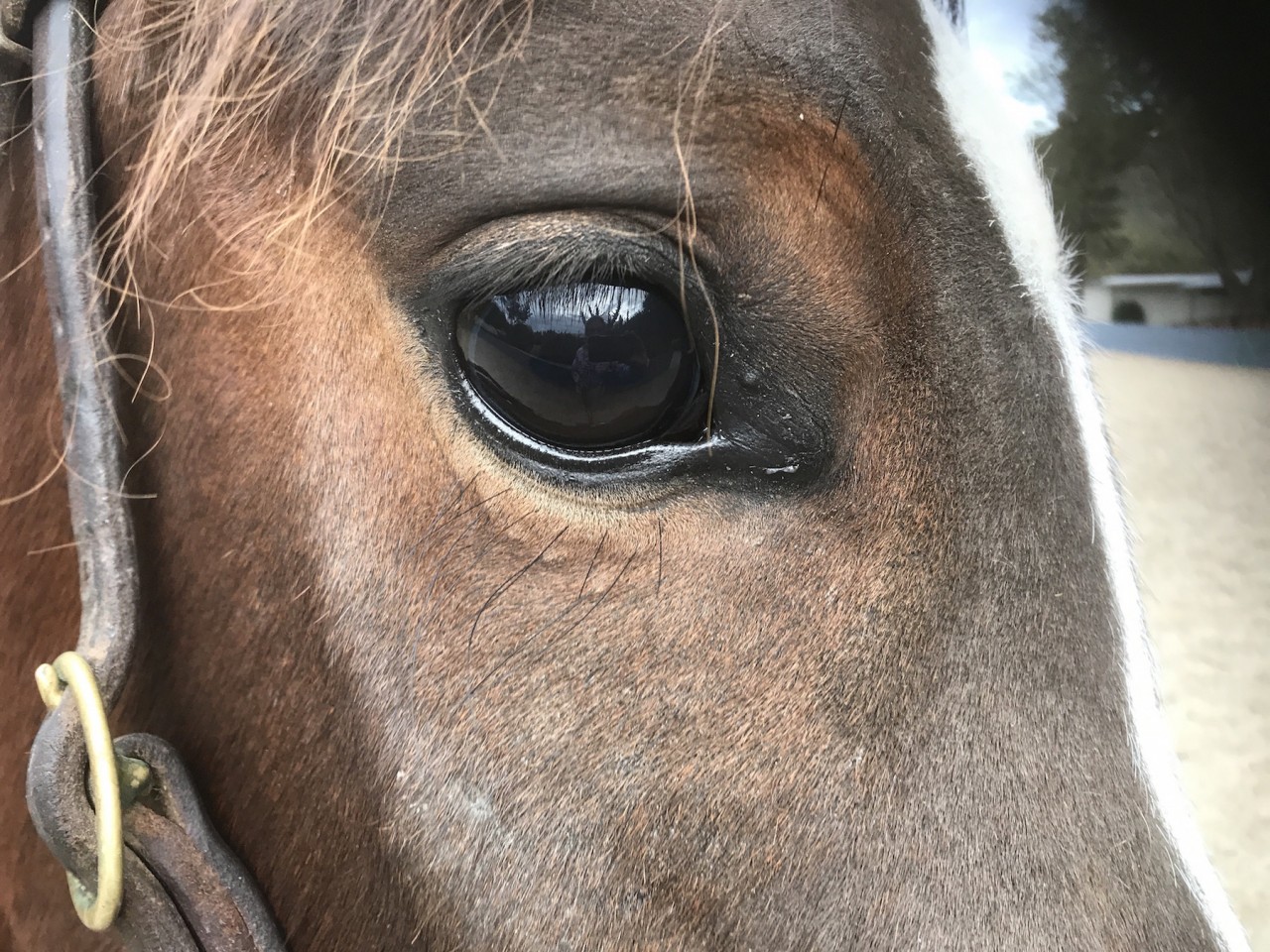 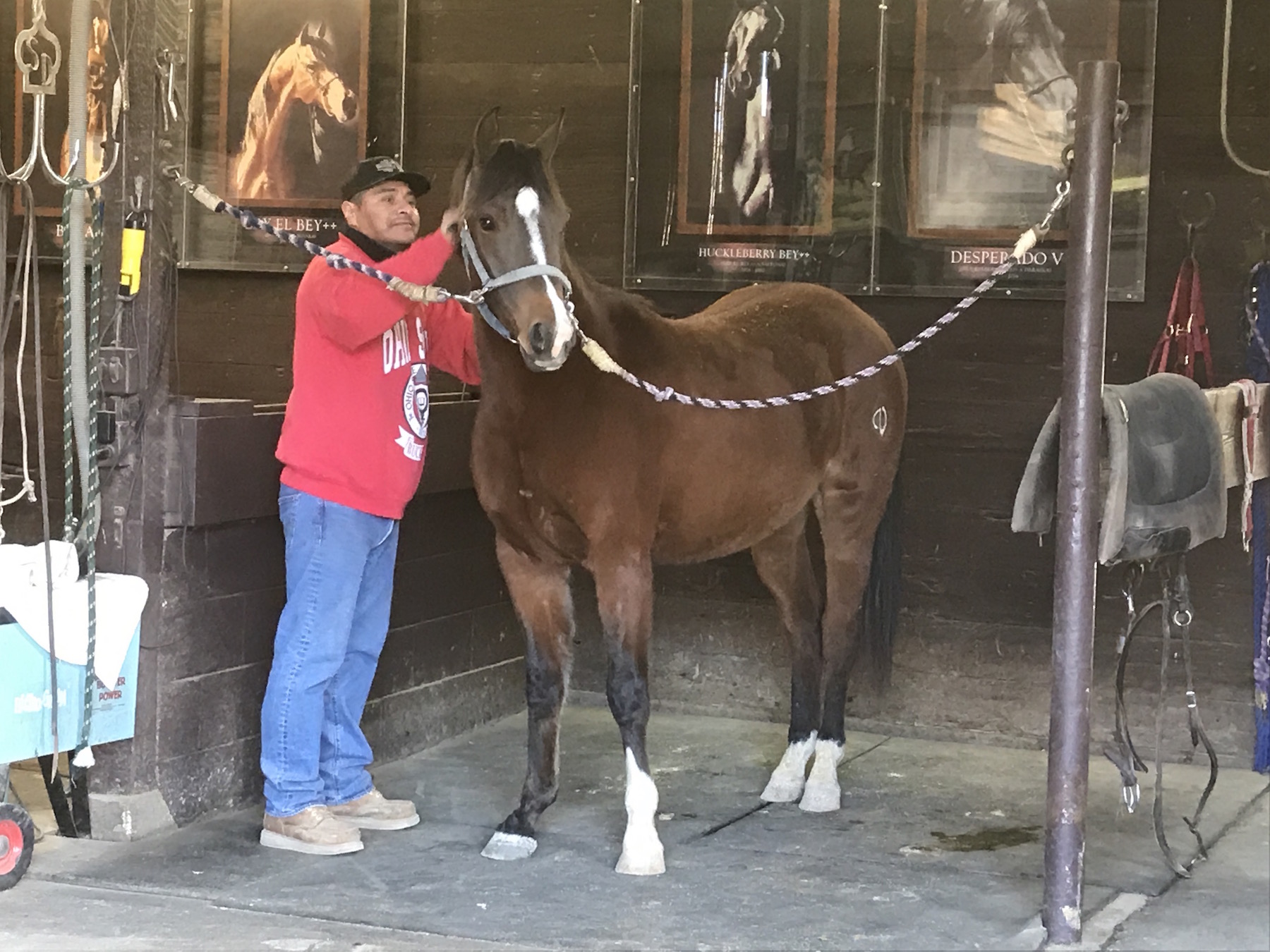 Rene led Arizona down from his pen and into the barn, clipping him into the cross ties. He brushed him all over as we chatted away in Spanish. I watched closely as Jaime placed the saddle pad and saddle on his back. Arizona pawed and fidgeted around, shaking his head, acting very coltish.

"No… no!" Jaime made him stand still. Arizona's big dark eyes shined, full of youth and joy and intelligence. It was Monday morning and he'd had three days off. I followed Jaime out into the cool morning as he led him into the arena, clipped the long line onto his halter, and lunged him around, allowing the excess energy to bleed out of him. I watched his ears, his body, his speed, and his eyes. I could see his demeanor shift from being a little over enthusiastic into a more relaxed and steady flow.

"Whoa." Arizona stopped, started to turn toward Jaime, but Jaime walked toward him, tapping his neck, making him stay in position in the circle.

He changed direction a few times, and each time Arizona did it better. He looks to be a fast learner.

"Now you." Jaime handed me the lead line and coached me as I tried to mimic what he'd done, insisting that Arizona stop and stay facing the same direction instead of turning to face me.

Jaime got on him then and with two little batons and a squeeze of his legs, walked off. I watched him walk around, trot around and lope a little, Jaime using perfect timing with his legs, his body, his hands, and the bat, reinforcing the cues that teach a horse the language between horse and rider. Jaime rode over to me and got off.

"Oh! …… Really?" Arizona had only six rides on him and I certainly didn't want to confuse him. I was thrilled just to be there to watch.

"No, he'll be fine." Jaime said, nodding his head and handing me the reins.

It's really handy that my legs are the same length as Jaime's. No adjustments needed. Taking the reins, holding on to his mane, I swung up and settled into the warm seat of the saddle. For a second, I closed my eyes. I felt like I was dreaming, I was so darn happy. It felt so right. Arizona's head raised just a hint as if he was assessing this new person on his back. I asked him to go forward and he did, nice and quiet, slowly, almost cautiously. I petted his neck and we walked around, me smiling from ear to ear. Giddy. He walked confidently over the poles and then onto the bridge, stopping at the top when I asked, just as Jaime had taught him. He paused for a moment at the edge of the bridge, needing to think about it for a second, then stepped gently down. "Good boy" I tried to sound like Jamie and petted his neck and rump. A couple minutes later I asked him for a trot. He picked right up into the smoothest, silkiest trot I have ever sat in my life. Since my smile could not possibly get any bigger, I did the next sensible thing. I burst into tears. Trotting around that beautiful arena in the sunshine, I could see the ghost of Sheila right there at the rail, Libby on the wall by her side, clapping her hands, that beautiful smile on her face, she looked so happy. Tears streaming down my cheeks, I asked for a lope. He had to think about that for just a moment, then picked up into a nice lope, correct lead and all. I only did a couple of rounds, then slowed to a trot, to a walk and went back to where Jaime was standing next to the bridge. He was wearing the same enormous smile as I was. I got off and hugged him tight. This may sound really corny, but it was one of the happiest moments of my life.

Later when I saw David, he could tell right away that the day had been a real winner. Telling him about it I started to cry again. I hate to tell you this, but I wept a little bit all day long, it was so emotional for me. To have this little gelding, who was so sweet, so perfect and so beautiful, and so very much a part of the woman who was my friend, my mentor. I dream about all the adventures I will have with Arizona, all the things he will teach me and I will teach him. This was the very best Christmas I can remember for a very long time.

Go ahead, offer me any amount of money for this horse. The answer is no. He's mine for life. 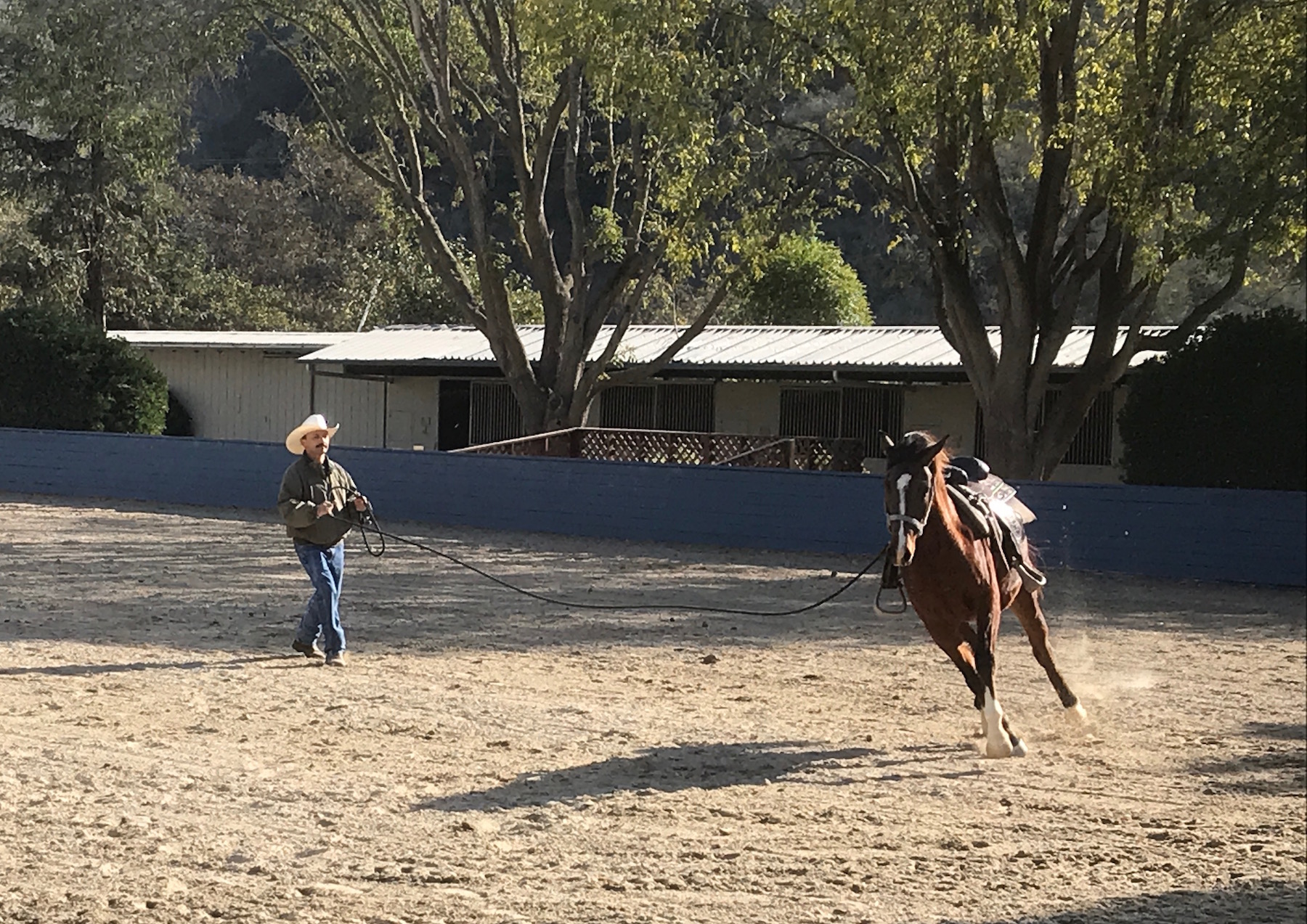 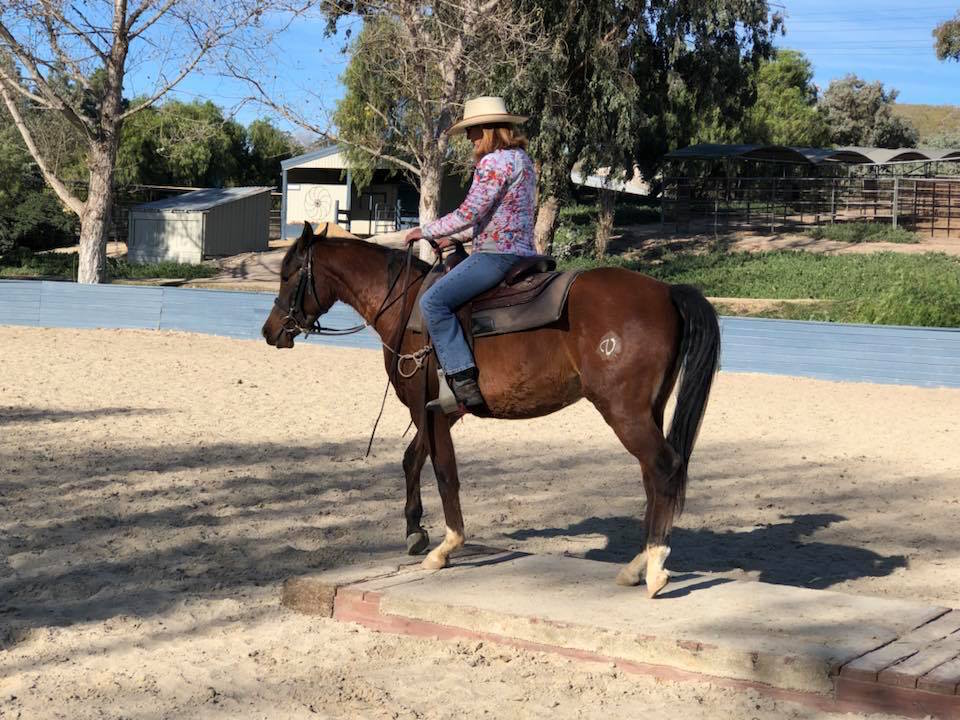