A Break in the Weather

It had rained for days…. and days. When my plane landed in San Luis Obispo, the clouds were clearing out. In the morning, the sun felt good on my back as I put Arizona's halter on and walked him down to my trailer, where my saddles and bridles waited. Scrubbing the mud from his belly, his legs, his neck, his back, I looked up and saw Mike waving at me as he walked a pretty little filly to the wash rack. "Good morning Lisa!" "Buenos Dias Mike!" It felt so good to be here at Varian Arabians, this farm wraps me in a feeling of such love and joy.

I swung the saddle up onto Arizona's back, and fitted the new hackamore on him. The main arena was soggy wet, much too mucky to ride in, so we walked back to the covered round pen where Jaime starts his colts. Arizona had been out romping in the hills with the other youngsters since Christmas and I figured that I, as much as he, could use some practice on the basics. After a bit of groundwork, I put my foot in the stirrup and settled into the seat of my saddle. His body was relaxed, he stood perfectly still, listening to me. I asked him to move forward and he complied politely. Keeping with the rhythm of his walk, I focused on my body position, closing my eyes and checking off the boxes, where were my feet, how were my hands, where were my seat bones. Even at a walk, there is so much to work on. With the rest of the world and all it's worries far away from my mind, I focused on my hands and the mecate and my seat when I asked him to step aside or around in a tear drop. We did some flexing and transitions, and that was it. He was so perfect.

That night, in Sheila's bedroom, sitting by the fireplace, I had my leftovers from the night before, watching TV and laughing out loud at some of the scenes. You might not know this, but Sheila's house does not have central heating, and the only heat is from wall heaters or a fireplace and the rest of the house was freezing cold. Sipping my wine, I looked over at where she would be, leaning up against her headboard, plate on her lap, long legs stretched out in front of her. She laughed that deep chuckle at the same things I thought were so funny. It was so much like she was right there with me.

For the next couple of days, Arizona and I did more of the same, but each day I added just a little bit more to our time together, we did some side passing, some shoulder in and out, some hip in and out, stopping on "whoa" and backing.

I think it was the third day, after we'd been fussing around in there, he started to tighten up over silly things, a bird chirping, a tractor starting. "Really, Arizona?" It was only because he was bored with the repetition. He's a smart boy and he was looking for something else to pay attention to other than me, so with a little smack on his hip from the end of my mecate, that was over. I was more interesting then, than the birds and tractors. Our last day, I put on my spurs. I did this only because he was a little slow on his response when I asked him for a lope. Jaime had worn little spurs on him, so I knew he was familiar with the idea. As we worked up through our transitions, and I asked him for a trot, he was lazy about it, so with a touch of my spur to his side and a kiss, he woke right up. There was a bounce or two, but from then on, when I asked for a lope, guess what. He stepped right up to it. After leaving the round pen, I got back on him and we walked around the farm. This was the first time he'd not had a buddy with him outside of the arena and although he knows every inch of this farm, it's much different when being ridden instead of being lead. He was alert, but not worried, his ears and eyes watching for any surprises. His Dad, Major Mac V, appeared from behind a bush as we walked by his pasture, and that made him jump a little bit, but that was it. No biggie. He is....so smart.

As I walked him up to his pen, watching the clouds darken and build up around us, I thought about what we'd worked on, which was such tiny little things, and then building up on each thing every day. I was sorry I had to leave and could not build more on what we'd played with. Since most of the time I just get on a horse and ride out in the hills, this was a delightful change and I understood more clearly the building on a foundation that all the good trainers talk about. All those tiny steps forward each day. In that round pen, it was easy to sink in to each other's feelings and responses and movements. It felt so intimate.

As I sit in the airport on my way home, I replay in my head all the moments of my visit. I thought of Sheila there, watching TV with me, laughing at stupid stuff. Remembering Major Mac sort of jumping out of the bushes when we walked by, I realized that would be just like her to challenge me JUST like that, and then laughing. It sure felt like she was there.. and she seemed very content. 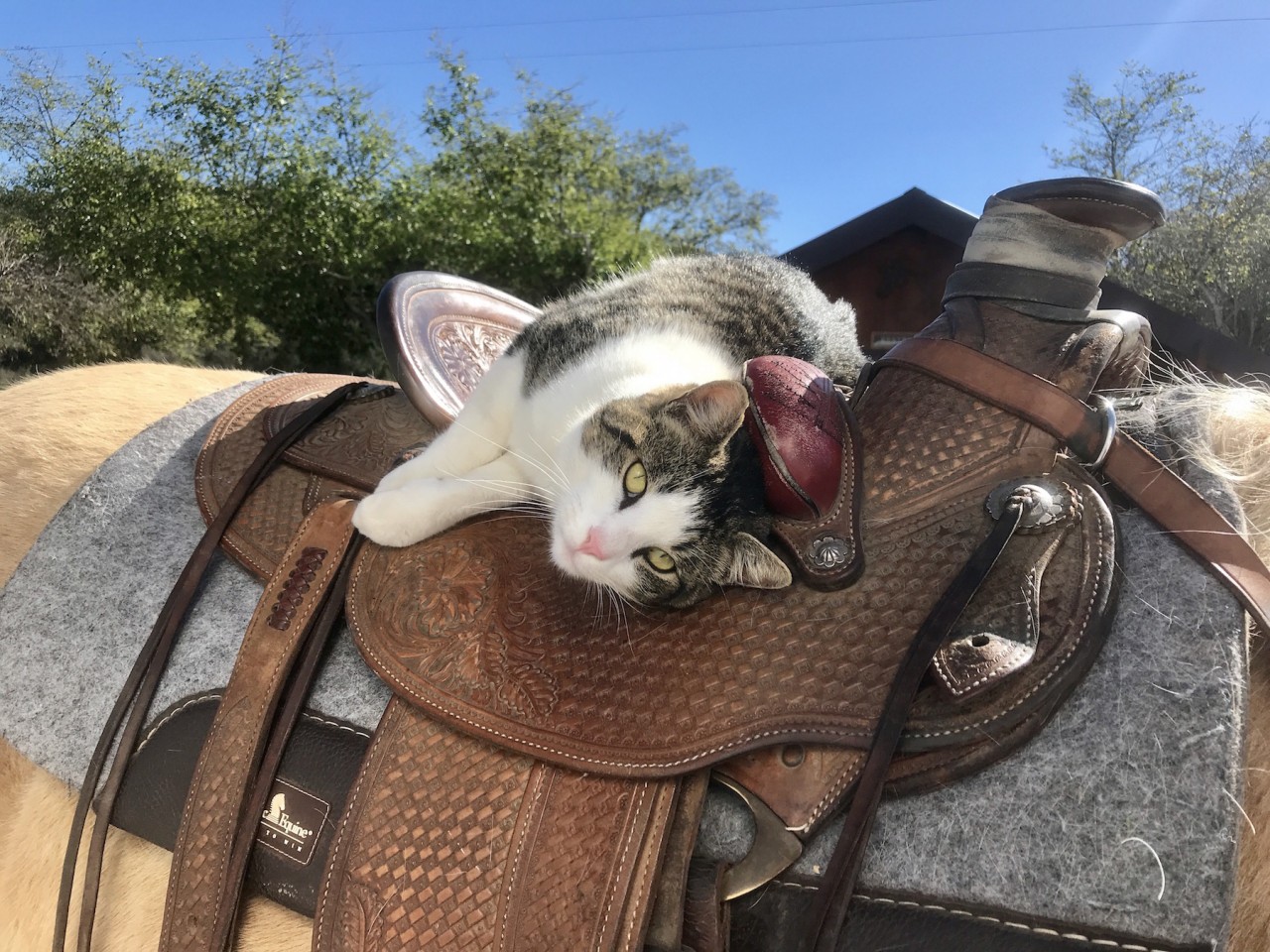