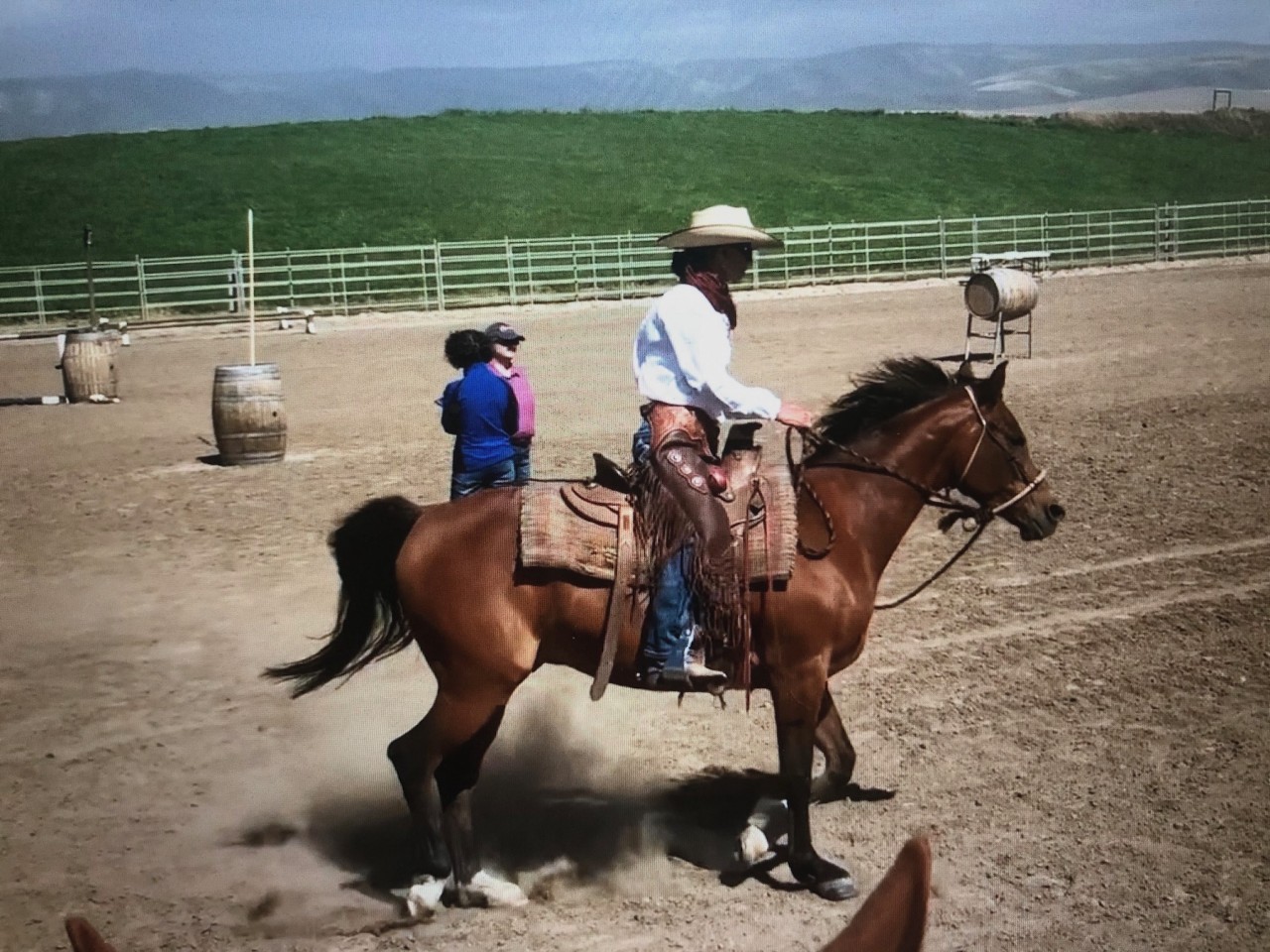 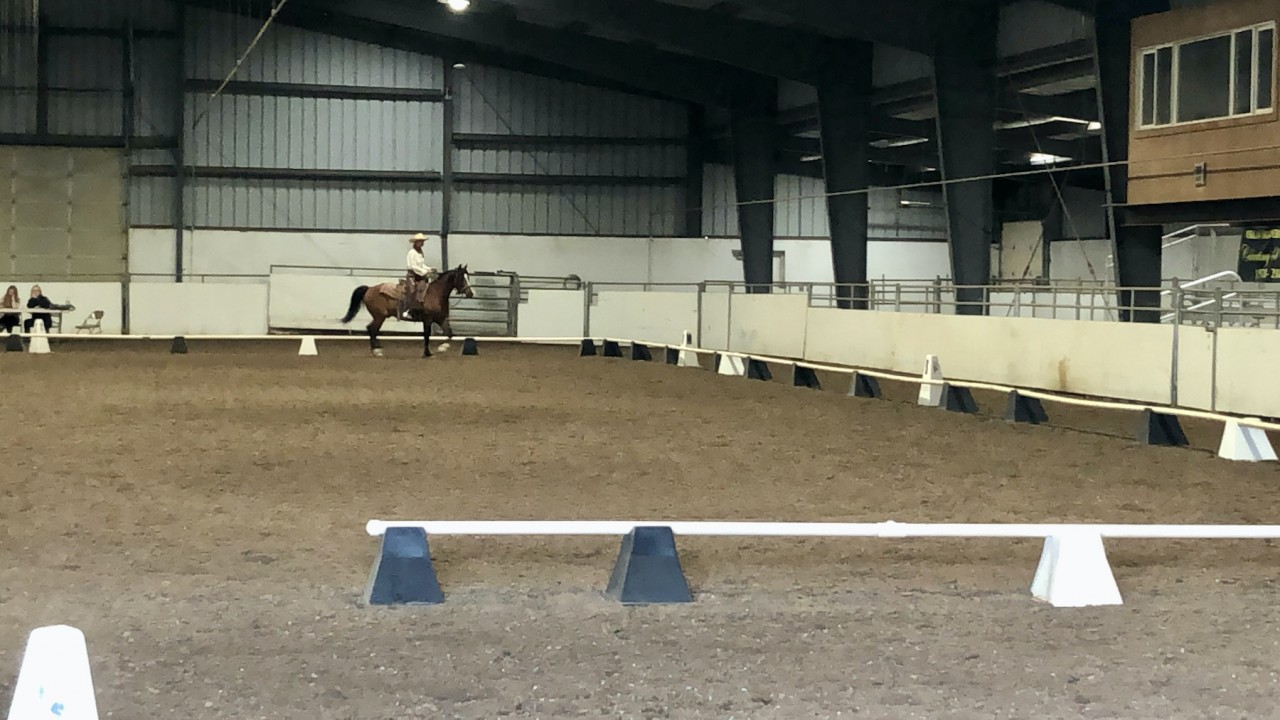 Looking in the arena gate, my palms were sweaty, I could hear my heart beating in my ears. What had I gotten myself into now? Arizona Mac V was fairly relaxed as he stood looking over the gate. Well, at least he was until the mule brayed from not far behind him. He seemed to shout at me "THE ALIENS HAVE LANDED!" He'd never seen one before.

After our trip to Portugal where I was introduced to dressage, I came home and bought a nice little dressage saddle from my friend Alexa, just to play around and explore. Alexa is more fun than a yard full of puppies. She's bright little red head, positive, optimistic and enthusiastic about everything, especially horses. This is not a forced attitude, it's just her nature. She rides English and Western, and rides well. We learned about a new sport to the United States called Working Equitation. It's been around in Europe, mainly Portugal, Spain and Italy, for some time, but the organization is just getting started here in the US. It is based on dressage principles, and includes obstacles, and sometimes cattle. Riders can ride in either Western or English tack, and your outfit must match your gear. A training barn near Walla Walla was hosting a competition and had arranged for practice sessions once a week until the competition.

I slipped the hackamore over Arizona's ears and led him down the barn aisle between the horse stalls. Small ponies nickered, a large black Hanoverian stallion turned and watched us silently. There were other equines of all sizes and colors scattered in between. The WW arena is a huge place, with great footing, and large mirrors all down one side. We'd been there a few times before, so Arizona was used to the mirrors, and seemed interested in a new game.

The first practice, Kent Wright, our host, had three obstacles set up. They looked extremely easy. After years of chasing cattle and riding in the mountains, I felt confident. Each week he'd add more obstacles or change the ones he'd set up. At home, I'd set up some obstacles of my own to play with and I took a few dressage lessons. Arizona is so balanced and seemed to enjoy the lessons and the work. I signed up for "Introductory Level", the most basic test, and got to practicing.

Competition day. I picked up Alexa and we drove over to the barn together, excited for the day. Not nervous, but excited. Well, that's a white lie. I was a little nervous. The dressage test was first, and we were up around 11:00. The warmup pen was a large round arena on the edge of the property. It didn't take long for Arizona to relax and start to come into me, and that's when we heard the mule bray. To Arizona, it sounded like a poltergeist scream. He couldn't find the creature with all those horses around, but he knew something was very weird about whatever made that sound. He came back to me after a bit, and we rode up to watch a few of the riders before our turn. That's when we heard it again. This time he saw it. She was walking up to us, to watch. "Excuse me, this horse (pointing to Arizona) has never seen a mule before." She turned right around and quietly walked away "I understand!" She said with a smile and a wave. He was just getting his wits about him when it was our turn to go compete. We could do a couple laps around the outside of the course before the test started, and as we rode up the side, between the course and the spectators, he froze. "Oh no... not good!" He started backing up. I turned him in a 360 degree turn and asked him to continue. He braved up and on we went. Our test was not perfect. Our circles were not round, our transitions were not spot on, but he really turned on his try. He lost concentration only one time, and I remembered the pattern, so for our very first competition EVER for him, and in the world of dressage, for me, I was happy.

By the afternoon, the wind had kicked up. At 3:00, I looked at my phone and saw the wind was from the southwest, blowing 29 MPH, gusting to 35. I touched my face and felt a layer of soft dirt. My allergies were making my eyes tear, so smears of mud ran down my cheeks. My hat was staying on, only because I'd pulled up my stampede string tight as a piano wire. Arizona was starting to get a little bit fed up with all the waiting around but was being good and quiet and very agreeable. He seemed to say to me "I'm kinda over all this, Lisa, but for you, I'll do it." The course had all the obstacles we'd been practicing, but some were a little bit different. The biggest concern, I thought, would be the Working Equitation banner that was tied to the fence right by the bell corridor, and that the marker poles were up on little stantions instead of on the ground. That was not like that before, and the banner was flapping in the wind a bit. Once again, we were allowed a couple laps around the course before starting. Arizona spooked at the banner, but then the judge rang the bell to start. He puffed right up, giving me what he's got. We did the gate, the double slalom, the cup. We trotted over to the bull line, picked up the garrocha pole and walked past the bull (wine barrel with a steer head on one end). He spooked at the end barrel where we were to drop the pole, but we made it work and dropped it in there instead of on the ground. He hesitated a moment at the jump, and we went over and on to the pen, where I thought he did a fine job of circling both directions, then headed to the bell corridor. I was on course, he felt good, but when we got up to it, he refused. "Not safe!" he said to me. "What the hell is that banner?" "Why is that bell ringing" (30 MPH wind) I asked him a little bit but felt that we were building a partnership here, and to make this happen the right way, would take more time than what we had right then in competition. Looking at the judge, I asked "can I take zero points on this one?" "Yes, please move on." He looked sideways at the banner on our way to the drums, but once there, was back with me. From there it was the bridge, then on to the water jug, back around to the enter/exit gate, and we were done. I saluted the judges and walked out, not feeling one bit disappointed in however my scores came out, because he and I were connected doing this. He tried his big heart out and for who he is, and on that day, he did great. So did I by the way.

This sport is so much fun. The atmosphere was relaxed, everyone was so supportive, there were horses of every color, breed, size, age and temperament. Riders were diverse. Schooling was super fun. And best of all, it offered a great experience for the bond between me and Arizona.