As our September 2021 trip to the Black Hills of South Dakota drew nearer this summer, I watched my mare TU Sihr With Love ("Lovey") closer and realized quickly that her being in foal to Major Mac V again had brought her barrel size much larger than I recalled her being when pregnant at the same point with Sihr Brigadier Mac V ("Sonny").  So, I re-evaluated my plans to take her on the trip, thinking that the long 2 day trailer ride from Las Vegas, Nevada would not likely be an amusing trip for her.  By July, I had made up my mind that Sonny, at just 4 1/2 years old was going to go instead.  I set my mind to getting him out on the trail at home, just to ensure he was ready.  Well, that didn't happen.  Life happenings got in the way, and pretty soon it was only a few days away, and we were packing up to leave for South Dakota.  Once we got Sonny in the trailer (or let him make the decision to get in, I should say), the trailer ride and overnight half-way in Wyoming were no big deal for him.  What a trooper you are Sonny, good boy!

We arrived at our destination near Custer, South Dakota on Sunday afternoon, unloaded the horses, and got them all settled in at the beautiful equestrian campground.  Sonny took it all in stride, and settled in quickly, taking in the surroundings and the cooler temps.   On Monday, a group of us tacked up and did a short 5-6 mile ride on the trails leading out from the campground.  I mounted Sonny, and off we went.  I mentally said to Sonny (and to myself), ok my buddy my pal, let's not embarrass each other... rub rub rub on the neck - one ear back... ok mom, let's do this!  To my surprise (and thankful pleasure) the ride was fairly uneventful.  Sonny was attentive and alert, yet calm.  As time went on during the ride, mile by mile, I felt him relax under me, slowly but consistently accepting all the unknowns and new experiences which, with many even more seasoned horses that I've ridden, could have been terrifying for the horse, and then a hair-raising ride for me.  Sonny had made it through his first-ever trail ride, and by the last 1/3 of the ride I felt him fully relaxed under me.  Thank you Sonny, good boy!

The next day was the pre-planned Mount Rushmore ride.  Although the first trail ride went so well,  I do have to admit, I was a little apprehensive about this next trail ride on Sonny, and I secretly said to myself the night before "maybe I shouldn't", a bit of self-doubt lurking in my brain. Nonetheless, we loaded up in the horse camp's older open side stock rental trailer, carrying 4 horses to the trail head, another trailer with 3 following us. Sonny hesitated to load in the scary contraption, but as usual, he eventually conceded as I did my best to remain calm and (with Sheila and Mikey's voice on my shoulder) allow him to take his time, reward him with release of pressure on each try, and let him make it his decision.  At the trailhead, we all saddled up, and off we went on Sonny's second-ever trail ride.  To my surprise he was as calm as could be right off the bat. I told him this was to be quite longer and more technical than yesterday's jaunt, but he moved forward at a smooth steady walk on a loose rein, pulling up the rear of the group, confidently taking in all the sights and sounds. Good boy Sonny!

As we got deeper into the trail going up, there were several sticky spots that he just wasn't ok with. Big step-down boulders and moving creeks were his nemesis he thought. No spook, just real hesitant. So, as to build his young-minded confidence (thank you Julie Renfro-Cross), and to spare myself from any unplanned dismounts, I chose to get off and walk him through many of the scary parts. With some persuasion from our trail buddies pushing him forward (mentally), his barn-mate Big Sky's encouragement from in front of him, and my patience, he got better and better with each 'obstacle'. By the time we reached the top, his confidence had grown ten-fold, and I felt our partnership solidify more and more. I talked to Sonny most of the way, I wonder if he understood, or if it was my voice that he liked hearing? After a short rest and lunch at the top (where he stood tied to a hitching post napping like a champ), and some great photos for prosperity, we tightened our cinches, mounted back up, took a deep breath and headed back to the trail head.

Sonny mastered the narrow 30 foot long, 3 ft. wide wooden 45 degree angle bridge, bushes and branches were no longer a worry, logs were easily and carefully stepped over, and he was much more brave going up boulder stair steps (except one spot where an unplanned stop caused his back-end to slip off the edge… but no worries… we recovered with no fall, and within seconds I had his brain back. Whew!!! Heart pounding. Good boy Sonny!) A fluffy squirrel crossed our path at one point, for which he startled, but then (with one ear turned back to me) he seemed to 'ask' me what to do. Just move forward Sonny… good boy. Moving water in the rocky creeks were still a concern for him, but with each one a little better hand-walked through, and one or two narrower ones ridden through. Yey Sonny!

Close to the trail head, the others began trotting and some cantering to get to where the trailers were parked. But not us, Sonny walked forward calmly and relaxed as if to say, "what the heck are they in such a hurry for"?  There's that one ear back on me again.  Yes, Sonny, you're making the right decision... good boy!

We took the next day off to let our horses rest, and visited Deadwood, South Dakota to play tourist for the day.  Then, on Thursday, just my husband on his horse Big Sky, and Sonny and I did a short ride off the campground again, a different direction.  Although there were no big technical boulders or moving creeks to deal with on this third ride, certain other new and exciting things appeared here and there for Sonny to experience (signs, cars, dogs, tractors, big birds, etc.).  He addressed each of them, one by one, usually without any hesitation in forward movement, checking in with me with that one ear and one eye, on each encounter.  We had become a team!

By the end of the week, I found Sonny to be almost a different horse than I had just 48 hours before. His demeanor always was calm and attentive,  But, now he had graduated, and I couldn't be more proud!

GOOD BOY SONNY, Good Boy!  Oh, the trails we will travel and adventures we will have now! 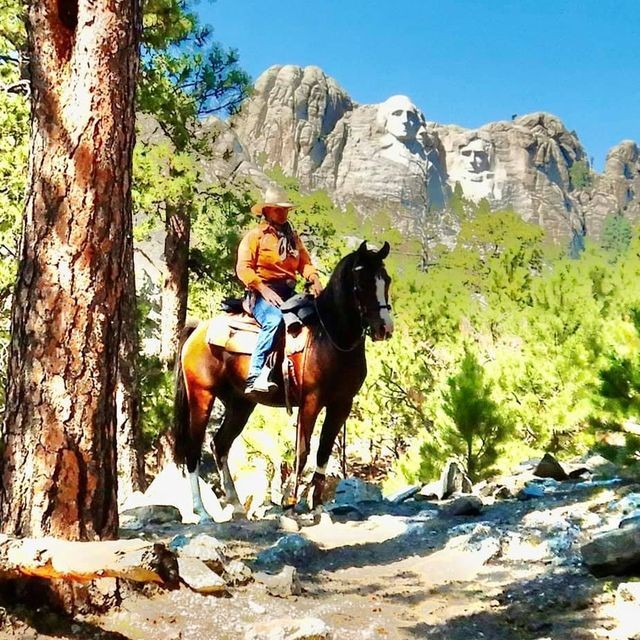 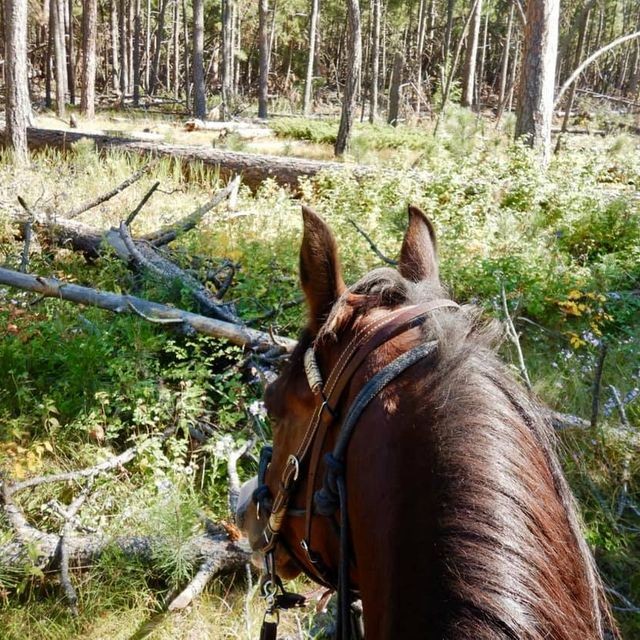 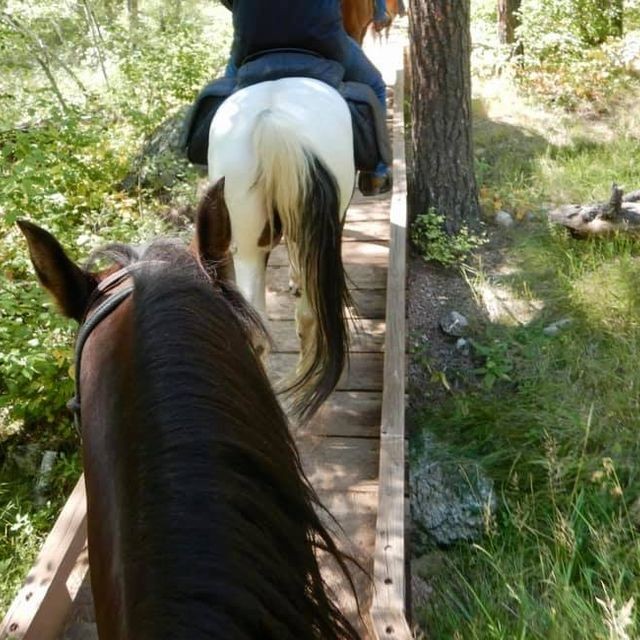 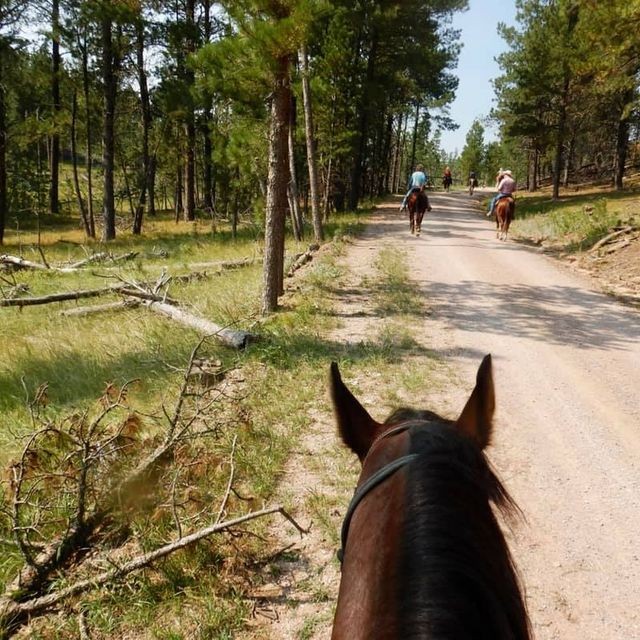