In horse raising and training, we as owners don't always share the bad stuff. Maybe it's a pride or ego thing. Regardless, all pride and ego set aside, I've discovered that lots of things can start occurring in a young horse's brain after he turns about 4 ½ years old, and Sihr Brigadier Mac V ("Sonny") has been no exception to that rule. The start of this young man has been exceptional, and just about as perfect as it can get. He's been alert and responsive, willing to learn, and calm with little to no spook. His confidence has grown immensely since his first few rides a year or so ago. Somewhere along the way though, about four months ago at just about 4 ½ years old, a bold and questioning attitude came to the surface. Not bad, not mean, just sort of 'testing'. Sonny had discovered that he just might know a thing or two, and suddenly he thought he knew everything. He was saying to me, 'No, I don't want to do that… I want to do this – I want to stop now, I don't want to keep going - I'm bored, I don't want to have lessons today, I want to go play in the field'. Fortunately, this sudden behavioral change was not my first 'rodeo' with a teenager's attitude (I have raised human children to their 20's and 30's, so it was all too familiar territory for me). But how do you sit a horse down, be stern and tell them what choices they have, or don't have!?This, for me was a huge challenge. In his first several trail rides, Sonny had been perfectly happy to pull up the rear and just follow his buddies. Suddenly he was anxious to be in the front section, leading the crowd. Going forward in training sessions suddenly was occasionally met with a sull up, and then wanting to back up instead. Of course, my reaction was some hip-yield corrections, which seemed to help a bunch. Experienced horsemen and friends assured me that this phase was not abnormal and they encouraged me to keep working through this phase in Sonny's training.

The Bruce Sandifer Hackamore Clinic at Varian Arabians farm, held in early November this year, came at the absolute perfect time for this dilemma I was in. The large arena was filled with 20-something horses and riders, and Sonny accepted (actually shined) as the new tools were introduced to him. He was very good in the crowded arena, and he was attentive and supple like butter in his new bosal and mecate set up by Brad Tarp. But, after several hours of stand, watch, practice, listen, stand, and practice some more… his baby-brain was just done with all of it. Bruce was amazing and offered to mount Sonny and steadily work him through his teenage attitude display. Wow!… Sonny wasn't expecting that! Ha! I had to giggle as I could see the whites in Sonny's eyes after the third or fourth extended trot around the big Varian arena, in and around so many horses standing and watching this whole ordeal unfold. Like magic, or like a teenager threatened with military school (lol), Sonny emerged as a wonderfully obedient young man. I was so proud to watch the lightbulbs go on over his little typey head!

Upon returning home to Las Vegas, and with the beautiful season change from hot desert summers to cool fall/winter weather, we had several opportunities to get out and ride the beautiful mountains and desert areas surrounding our city, and boy did we take advantage of it. Sonny and I have several wonderful trail riding friends that we go out with almost weekly. With each ride, Sonny was again showing significant improvement in his confidence and trail abilities. What was 'training' six months ago was slowly but surely becoming a partnership. One development was going down big rock steps, which had become a gladly attempted challenge and no longer a scary obstacle for him. Large man-made obstacles became easier to move through with no more refusals.

One cold December morning, just before the holidays, we ventured out into the Southern Nevada desert with a small group of friends. On this particular ride, Sonny showed a bit of initial agitation at the onset (a very cool morning with no time for warm up, new horses, dogs on the ride with us and under hoof, not being next to his usual buddy Sockets, first trail ride in the hackamore, etc.). But, within about 10 minutes, and the standard initial trail group order of go rearranging, he was perfectly fine. There was a dusting of snow that had fallen the night before, and Sonny was very curious about this weird crunchy white stuff on the ground. To my surprise, he was happy to step in it and test it out, after which it was nothing of any worry. After about 2 miles, we came across a couple of bicyclists, who courteously pulled aside as we meandered by on the trail. Sonny was not concerned about them at all (thanks to the kids in my neighborhood that ride their bikes in the dirt lot next to my barn for Sonny to closely observe over the fence…desensitization at its best). By the third mile on the trail, I moved Sonny from the back to middle to front positions to reassure him that regardless of his position in the group, he was safe with me. He was happy to follow, happy to lead, happy to be in the group. I was elated at this new-found positioning acceptance.

Here's where it got a little 'sticky'. At the top of the bluff, the group stopped for a photo-op and rest. I decided this was a great place to dismount and check my cinch, which I felt was a little loose. After doing so, I led Sonny around the area to find a large enough rock to use as a mounting block (yes, necessary at my age and his unusually tall self). Once one was located and tested for stability, I set Sonny up next to it to stand and wait for me to mount, this being another teenager test he's recently come up with… attempting to walk off as I mount. Anticipating this, I bounced up and down and checked his mindset. So far, so good. Just as I lifted my left foot into the stirrup and began to pull myself up, the "stable" rock teetered slightly, throwing my momentum off just enough, and Sonny slowly stepped away, just one little step at the same time. My reflex was to catapult myself up and into the saddle…. Ya, right! The next thing I saw was my face looking right at the right-side stirrup, upside down. Sonny decided that I was apparently "on", so he continued gently meandering and walking away… all whilst this old cowgirl hung literally over the saddle, legs in the air! I kept telling myself to "hold on" and don't bail! I found the rein on the right side and steady bumped up on it as best I could, requesting "woah" a few times until Sonny finally halted, standing still as a statue. Dragging my body back in to position and swinging my right leg over where it was supposed to be, I sat in the saddle and looked at the mountains in front of us and took a deep breath, shaking my head in awe of what had just happened. I turned Sonny around to face where my riding partners were sitting on their horses, dogs at the alert at their sides. All of them were just looking at me, mouths wide open, deer in the headlights look. Before I could even get my thoughts together, the first thing out of my mouth was, "PLEASE tell me someone got that on camera!" Of course, they had not. They had been too worried about what my demise was going to be. We all had a good laugh, and I quietly and to myself thanked our trainers and Sonny's heritage for his good mind and unruffled reaction to what could have been a total disaster.

Along the trail we went, hilly switch-backs, slippery icy rocks, frozen-over water puddles to crunch under hooves, hikers and their dogs. It was a beautiful day and all was now going so well. We headed along a section of the trail where it became narrow requiring head to tail riding. On our right side it was an up slope, and on the left side a pretty steep down slope. All of a sudden, Sonny plunged up the hillside slope, spinning and throwing his body around like he'd been attacked in the butt by a Raptor! I struggled to stay centered in the saddle, but somehow I did. After the surprise, and things got somewhat under control, my riding friend behind me yelled out "he's got a cholla cactus branch stuck in his tail!". Now, anyone that knows me, knows that I absolutely despise cholla cactus, they're utterly awful! These buggers literally jump out at horses and riders (hence their nickname "jumping cacti", and for a horse who's never experienced them it can be truly traumatizing. The 7-8 inch stickery spiney branch was literally banging against Sonny's hocks as he continually swished his tail all around trying desperately to remove it. I knew what I had to do. I dismounted quickly keeping my mecate get-down rope firmly lodged in my belt, found the sticker-filled culprit in his tail, and held his long thick tail away from him to create some semblance of calm without touching the darn thing myself. Deep breath. I immediately dug my leatherman tool from my trail pack, and rubbed on Sonny's neck with my gloved knuckles to reassure him that I'd get it out for him, which I did, all while we both stood at a precarious angle on part of the hillside. Inspecting his tail, hocks, and legs for any remaining needles, and clearing any that I could see, I took another deep breath, remounted, and we headed along the trail. And, what a beautiful day it was.

As we headed back to the trailers along our several mile ride the sun was shining, we could hear the crunching of the frozen ground and ice under our horses' hooves, and warm breath created steam from the mouths of all of us, horses, riders, and dogs. It was pretty crisp and cold. But I had an amazingly warm feeling in my heart. Sonny and I were still building our partnership. His young mind, although smart and questioning, alert and responsive, was learning to trust me… and more importantly, I was learning to trust him. I realized as we sauntered along that no horse is perfect, and that it's the experiences, the growth, the trust, and the bonding during these unplanned yet notable incidences that build the great horse and rider relationships and partnerships. We just need to keep moving, keep working through these situations, don't give up, keep putting one foot in front of the other, and Hold On! I'm so looking forward to Sonny's and my 2022.More challenges, experiences, and exciting adventures to come, to learn from, and to share. I can't help but feel that Sheila somehow had a hand in this. 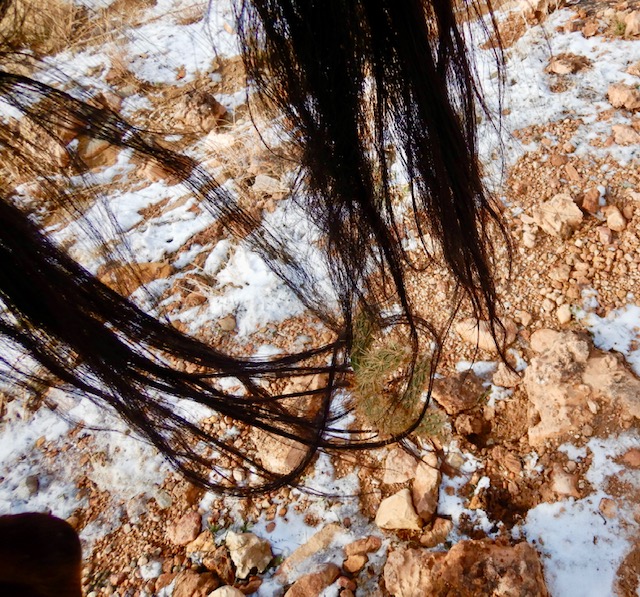 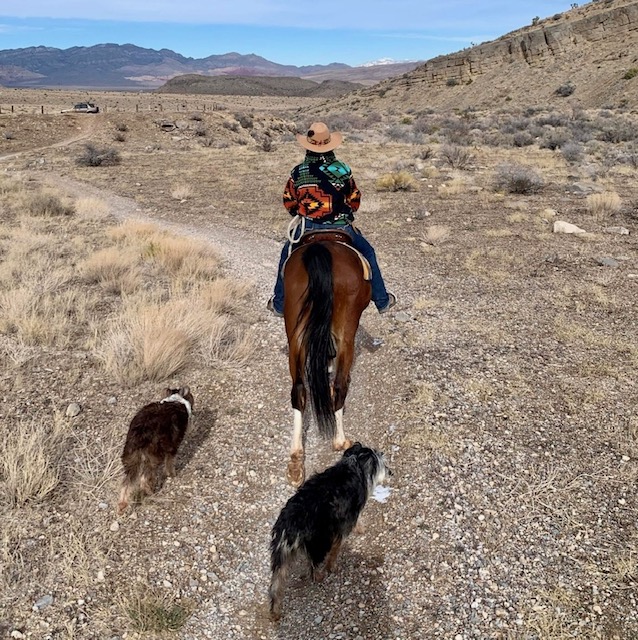