Every spring and fall, the El Zaribah Shrine Mounted Patrol puts on a roundup at the EZ Ranch in Cordes Junction, Arizona near Prescott. We've attended and worked it every fall for several years, and this year I decided it was Sonny's turn to go. I felt he was ready for another experience and adventure, since he'd been doing so good on the trails. So, off we went to the cattle drive. We arrived early on Thursday and unloaded the horses, got them settled in their pens, and spent the first afternoon just setting up our LQ, getting caught up with regulars that return at least annually to this fun event. It was a quiet, sunny, beautiful day. Sonny settled in amazingly well, and was attentively curious as he watched as many more trailers arrived, lots of horses were unloaded, the caterer's trailer was getting set up, and people milled around laughing and cutting up. Tons of activity to observe for a young horse. But, I was happy to see it was not impacting his solid calm brain.

Early morning Friday was slated for the 'round-up' cattle drive. Before the sun was up, the breakfast bell rang and cowboys and cowgirls were filling their plates with a hearty hot breakfast and sucking down a quick cup of joe. By 6:00am folks were saddling up. Our LQ was parked right in front of the congregating area, so we heard the activities and laughter. My husband will attest, I'm not much of a morning person, so this crack of dawn stuff was killing my incentive to do anything except find the nearest cup of coffee. When I stepped outside of the trailer, I was literally shocked at the number of people already mounted, and more saddling up to go. I stopped counting at 20, and looked over at Sonny in his pen, taking a deep breath and wondering what he must be thinking as he looked at me, then looked at the crowd of riders, and then looked at me again. Big Sky had his rear-end to the activities, much more interested in the hay on the ground. I had spoken to the ranch owner the night before at dinner, and he said they had about 130 head to bring in, and they were farther out, which will require us to ride out about 12 miles, and then drive them back in. Of the 20-something riders, at least half of them were on hot horses, some running in place, a couple spinning and stirring up the dirt on the road. Of course, once a few started, a few more fed off of them and joined in. I evaluated the scenario, and said in mental telepathy to Sonny, 'is this what you want to experience for your first time pushing cows?'. Our silent communication agreed… Nope! As Sonny's 'partner' I felt I owed it to him to make his first cattle working experience a positive one, a confidence builder, and not a scenario of frenetic activity! We waived them off, and waited about an hour before saddling up. A few others had the same analysis of the situation, and decided that they would hook up with us and just ride out to where the others would eventually be coming through the far mesa gates. Six of us took this option, and we all agreed we were happy to have taken a pass on the drive this year.

Our ride was wonderful, Sonny couldn't have been in a better frame of mind. He was happy, moving forward at a good working walk clip, and glad to get out, albeit leaving his barn buddy Big Sky back at the pens. We rode in the back and enjoyed the beautiful views with Sonny so relaxed, passing through a few gates carefully, through a few thicket tree areas, dodging Arizona grasshoppers the size of stealth bombers that popped up in front of us every 10 feet (yikes), and over some rock beds that during some parts of the year are full of running creek water. Sonny found a new pal to ride behind, and along side of. As we were returning to the ranch, I suddenly looked back and realized that we were in the middle of the group. Way to go Sonny, look at you building your own confidence! Turning the corner on the return to the ranch we had to pass right through the middle of the equipment yard. Cranes, tractors, dump trucks, water trucks, gasoline and water towers, stacked panels…. You name it. I thought, 'oh no…. this isn't gonna be good'. Deep breath… relax… feet loose in the stirrups… rub rub on Sonny's neck. Not a flinch! Sonny looked up ('are you my mommy') at the crane. But, just kept moving through the yard…. Whew! We made it! Coming back in to the ranch, several folks mentioned how good-looking and what a good boy Sonny is. I covered his ears and told them not to say that out-loud, he already knows it all too well! It was a good 4 hours before the herd was brought in. Sonny and I both had time for lunch and a nice nap in the cool breeze and warm sun. What a great day.

Saturdays at this event are traditionally set aside for gymkhana activities where participants pay a fee to run (most trot through) barrels, poles, and a key hole for donated prizes, and the entry fees go to the Shriners for the kids, a great cause. Hilarious to watch, but not my cup of tea. I had no intentions of entering with Sonny, but I did hand-walk him down to the arena to watch. He wasn't sure at first what to think of all the whooping and hollerin', signs, flags, bull-horns, PA system, and lots and lots of riders milling around (beers/seltzers hanging in their water packs off their saddle horns). He was definitely hesitant to get too close, but 4-6 steps at a time, and we got to a good viewing position. Alas! There's grass growing around the fence line! Sonny decided that was a great reward for all this standing around and watching the shenanigans.

Later that morning, Jeff and I saddled up Sonny and Big Sky for a long hubby-wife trail ride. We were parked right next to a travel trailer with 6 adults and 4 children under 5 years old. Oy!!Sonny stood tied to the side of the trailer, and although he looked at the kids and all their toys a lot, he never got shook up about it, even when the bubble machine went off and a big bubble floated right in front of his face. Good boy Sonny! I took the trail ride opportunity to do some more slow confidence building with Sonny. From time to time, Jeff and I would ride away from each other staying 100 yards or more apart. Sonny was perfectly fine with this, turning his one ear to me occasionally to ask if all was ok. Yes Sonny, you're doing great! Rub rub. We took a wrong turn as we headed back, and ended up on a bluff above the ranch looking right down in to the cattle pens. We heard them loud and clear as we walked along the bluff edge, they were mooing and calling and crying since the babies had now been separated from their mamas. Around the bend we suddenly ran in to a small herd of deer which we thought were Mule Deer, but later learned were Red Deer (I'm told it's the best venison you'll ever have) which are raised at the ranch for hunts. So beautiful were these crimson-colored creatures, standing literally 20-25 feet from us. Sonny flat stopped and stared! His ears were so acutely focused on the little herd that his lovely tippy Varian-bred ears were almost touching at the tips. "Halt!" he said to them I'm sure, Big Sky following suit and staying close by. The 'stand-off' between the equines and these other interesting four-legged beings lasted for what seemed like several minutes. Sonny took a careful step forward, dropping his head and giving his best Arabian snort, to which the deer moved up the embankment about 10 yards and re-assessed the situation behind them. Sonny took another couple of steps forward to which the deer scurried around the bend and out of sight. I'm sure Sonny was totally aghast at what had just happened. But, within seconds, I felt his tense body relax and heard his deep sigh of contentment. Good job Sonny! As we re-entered the ranch gates, I noticed him turn his head toward the hill-side where we saw the deer and wondered if he could still see them. Good boy Sonny, good boy.

The rest of the weekend was spent relaxing, introducing Sonny to cows through the no-climb fence, and showing him all the other fun things that are frequently seen on a cattle ranch. He was sure he was quite powerful when a group of heifers lying next to the fence immediately got up and moved away from him. He looked right over at me as if to say, "Wow, mom, look what I did!". Yes, Sonny, you're cowy for sure! And, someday soon, when you're ready, we will work the cows up at the V6 Ranch in Parkfield so that you can really participate and start to learn how to be a cow-horse.

Heading home to Las Vegas, I did a lot of thinking about Sonny's progression to date. I can't help but feel we've been doing this the right way. Author Louis Sachar once said, "It is better to take many small steps in the right direction than to make a great leap forward only to stumble backwards. "Sonny and I whole-heartedly agree. 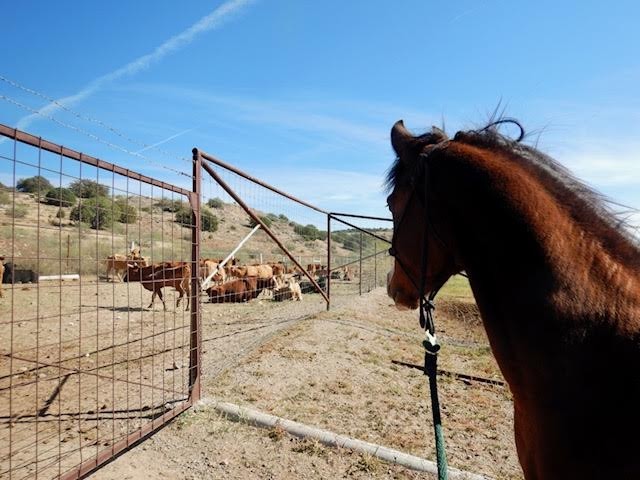 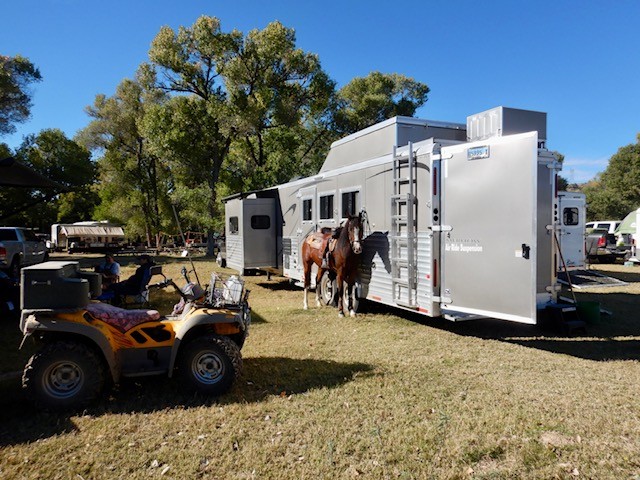 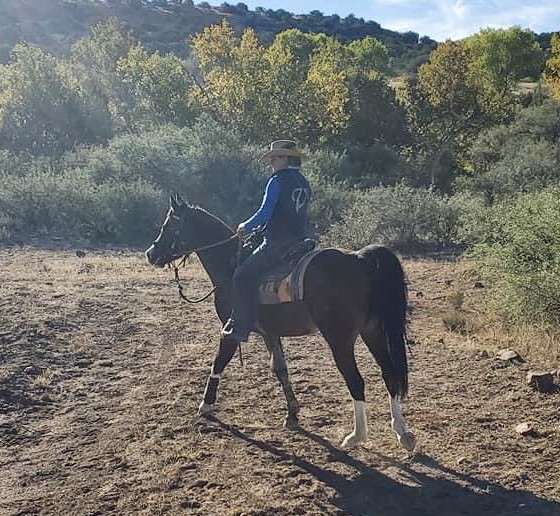